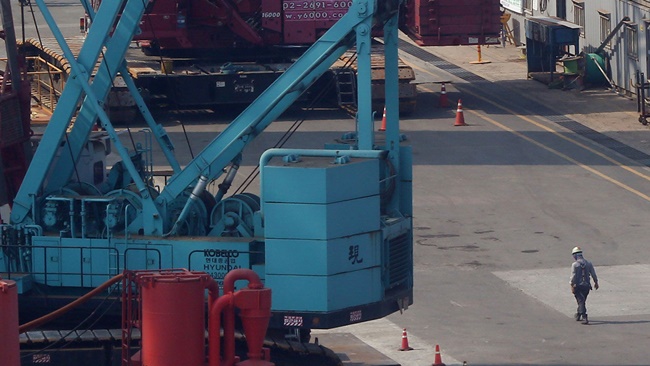 Data from the Ministry of the Interior and Safety and Ulsan Metropolitan City released on Friday revealed the number of South Korean nationals living in Dong District has fallen below 170,000 for the first time since 2007. (Image: Yonhap)

Data from the Ministry of the Interior and Safety and Ulsan Metropolitan City released on Friday revealed the number of South Korean nationals living in Dong District has fallen below 170,000 for the first time since 2007.

The dwindling population of the famous shipbuilding town is due in large part to an economic slump that has hit the South Korean shipbuilding industry hard, prompting a number of major shipbuilding companies including Hyundai Heavy Industries and Hyundai Mipo Dockyard and subcontractors to carry out restructuring programs and introduce staff cuts.

It’s the first time however that the figure dropped below 170,000, sending warning signs to local authorities.

Other data from the Ministry of Employment and Labor last month showed that the number of workers with employment insurance in the shipbuilding industry dropped by 23.3 percent during November.

“Many workers in the shipbuilding industry have left town after losing their job. We have established a population policy plan to improve the living situation and introduce support programs for education and childbirth to stop the population outflow,” an official from the Dong District office said.

Earlier this week, President Moon Jae-in traveled to a shipyard in Ulsan in his first on-the-spot visit of the year to encourage shipbuilding workers during one of the tougher times for the industry.

Moon has already pledged to provide financial support for the industry, and called on public corporations to place orders as a means of tackling the hardships faced by shipbuilders.

Since the bankruptcy of Hanjin Shipping, the South Korean shipping industry has been struggling to fill the vacuum left by what was once the country’s top player.