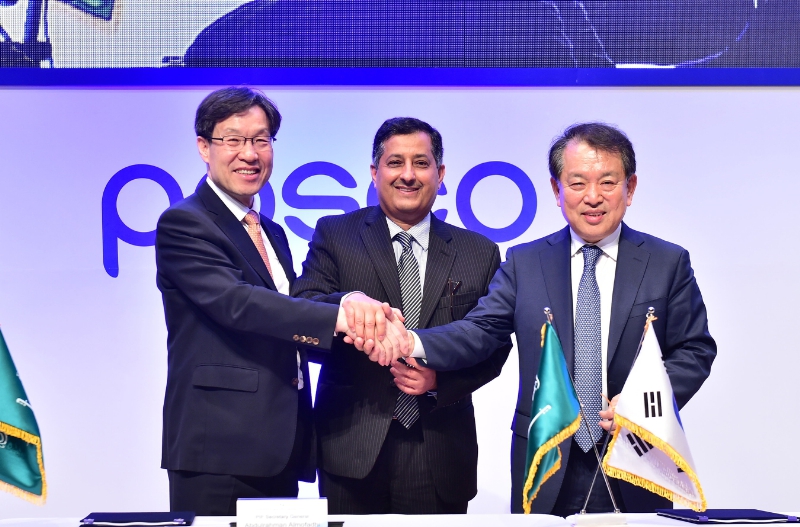 On June 15, 2015, POSCO Chairman Kwon Oh-joon and PIF Secretary General Abdulrahman M. Al Mofadhi officially signed the SPA for 38% stake in POSCO E&C (10,802,850 shares owned by POSCO and 5,083,694 new shares to be issued by POSCO E&C) at POSCO E&C’s headquartgers in Incheon Songdo, Korea. The investment gives PIF a right to appoint two board members in POSCO E&C’s board.

At the ceremony, POSCO’s Chairman cited an Arab proverb, “Choose the right companion ahead of a long trip,” and emphasized the historical background and significance, saying, “The origin of our country name, ‘Korea’ as we are known today in the western world, can be traced back to the Arab merchants who sailed all the way to Korea’s Beokran Island, which is only 50 kilometers away from where we are standing now.” He added, “I think the reason POSCO and PIF could join hands today to look forward into the future together also takes roots in this history of more than 1,000 years of friendship.”

The agreement comes after 9 months of preparations — due diligence and negotiations — since receiving an Indicative Offer from PIF in the end of August 2014. In March 2015, the two companies also signed a Memorandum of Understanding (“MOU”) on strategic cooperation in Riyadh, the capital of Saudi Arabia, when President Park visited Saudi Arabia and three other nations in the Middle East. During the visit, President Park expressed strong interest in the partnership, and the government’s active support in leading to the successful signing of the SPA is cited as the most meaningful outcome of the presidential visit.

Despite numerous challenges, POSCO and PIF succeeded in reaching to the agreement based on mutual trust and strong commitment to the collaboration.

Established under a Royal Decree, the PIF invests into Saudi Arabia’s key manufacturing and infrastructure businesses and owns the largest a investment portfolio in Saudi Arabia. PIF currently reports to the Commission of Economic Development (“CED”) under the Council of Ministers, CED is responsible for overseeing the economic development of the Kingdom.

This investment will enable POSCO E&C to achieve its twin goals of improving its capital structure and establishing a transparent management system adhering to global standards. POSCO E&C has been focusing on deleveraging efforts over the past 3 years, and the proceeds from the new share issuance to PIF will improve the company’s capital structure, hopefully leading to improved credit ratings. With the two PIF appointed directors scheduled to take board seats, POSCO E&C will have a rare chance to become a private company to improve management transparency and operating efficiency to meet the best in global standards.

The two companies also intend to establish a Joint Venture (“JV”) in Saudi Arabia and jointly bid for key national construction projects in sectors such as railways, urban infrastructure, hotels and architectural projects. This will be a mutually beneficial arrangement since both POSCO E&C and Saudi JV will secure profitability and stability from such projects while the Saudi JV will receive additional benefit in form of technology transfers from POSCO E&C which translates into improved capabilities within the Saudi construction sector in due course.

POSCO is also looking to identify and pursue new opportunities, such as ICT (Information and Communications Technologies) and IPP (Independent Power Plant) and this relationship with PIF could help this initiative.