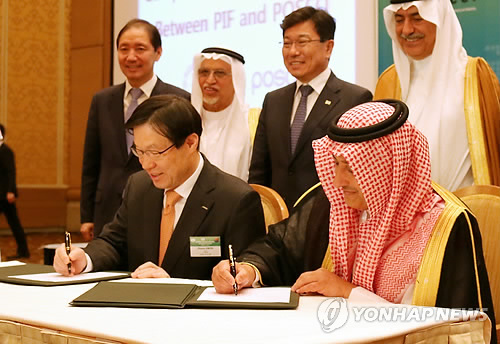 Under the deal, both promised to build comprehensive cooperative relationships that cover many areas including construction and automobiles. (image: Yonhap)

SEOUL, March 4 (Korea Bizwire) — POSCO, South Korea’s largest steelmaker, said Wednesday that it has signed a tentative deal with a sovereign fund of Saudi Arabia to push for “comprehensive” cooperation that includes construction and automaking.

The tie-up was promised under a memorandum of understanding signed by POSCO CEO Kwon Oh-joon and Abdulrahman Al mofadhi, head of the Public Investment Fund (PIF) of Saudi Arabia, the steelmaker said. Kwon accompanied President Park Geun-hye on her trip to the Middle Eastern country.

Under the deal, both promised to build comprehensive cooperative relationships that cover many areas including construction and automobiles, the company said.

The deal comes as both firms are pushing for cooperation on numerous fronts.

The sovereign fund has been in talks to buy about a 40 percent stake in POSCO Engineering & Construction, a deal estimated at over US$1 billion. The PIF and POSCO are also reportedly pushing to launch a construction firm tasked with social overahead capital business in Saudi Arabia.

Separately, Daewoo International, the trading arm of POSCO is considering taking part in a project spearheaded by the Saudi Arabian government to produce vehicles.

To that end, Daewoo International reportedly plans to purchase a 15 percent stake in a company that the PIF will launch to carry out the project and join the whole car manufacturing process ranging from designing and parts supply to assembly.