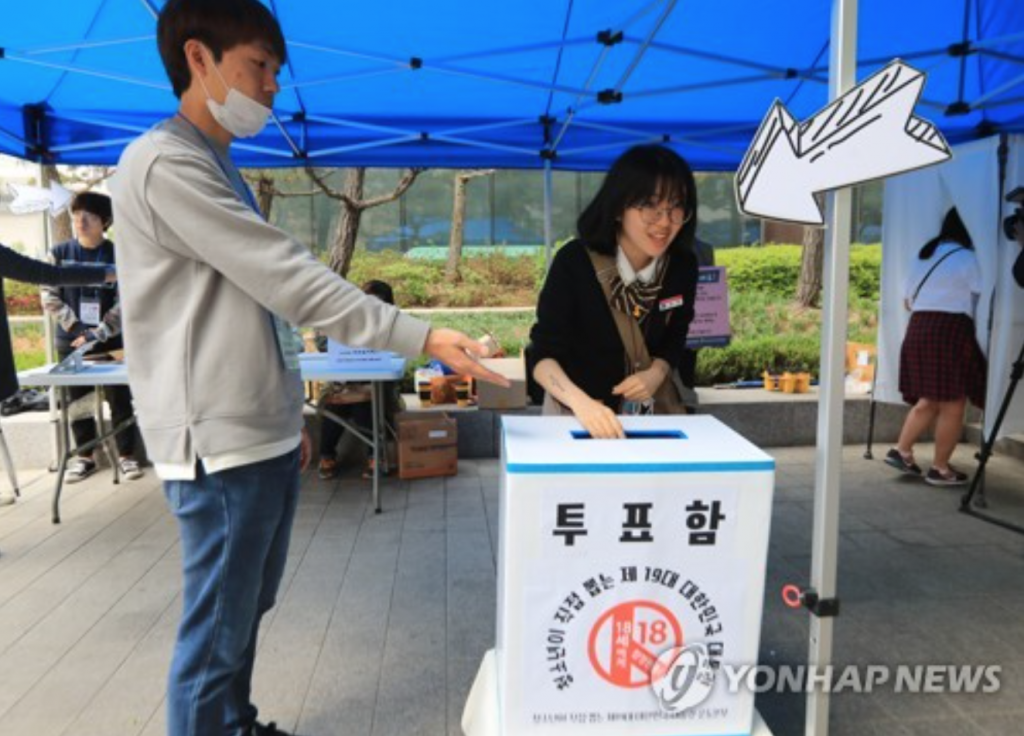 A total of 60,075 young South Koreans under the age of 19, which is the legal voting age here, applied to become a part of the mock election, 51,715 of whom ultimately participated. (image: Yonhap)

SEOUL, May 10 (Korea Bizwire) – South Korean minors who have yet to reach the legal voting age also chose Moon Jae-in as the new president in a mock election arranged by YMCA Korea. Of a total of 51,715 votes, President Moon received 39.14 percent of all ballots at 20,245, officials said Wednesday.

Unlike the actual results, however, Sim Sang-jung, the candidate from the progressive Democratic Justice Party, ranked second at 36.02 percent. She was followed by conservative Yoo Seung-min of the Righteous Party, centrist People’s Party candidate Ahn Cheol-soo, and Hong Joon-pyo from the Liberty Korea Party, a pro-Park Geun-hye faction of the conservatives.

The mock election took place at 30 polling stations across the country. A total of 60,075 young South Koreans under the age of 19, which is the legal voting age here, applied to become a part of the mock election, 51,715 of whom ultimately participated.

“Throughout time, humanity has broken down the walls of class, gender, and race to voice for human rights and democracy. What remains now is age,” said the YMCA. “We ask the new president to bring the change he promised, and lower the voting age to 18.”

South Korea is the only country among OECD members that prohibits 18-year-olds from voting. The age was lowered from 21 to 20 in 1960, then to 19 in 2005. During the election campaign, the two liberals – Moon and Sim – indicated strong support for motions to lower the age to 18.

“The rights and welfare of adolescents will only improve if they’re given the right to vote, just as they did for women and African Americans (in the U.S.) with their suffrage,” said 15-year-old Kim Sang-chun, who cast his ballot on Tuesday. “Young people tend to be indifferent to politics because they have no political rights.”