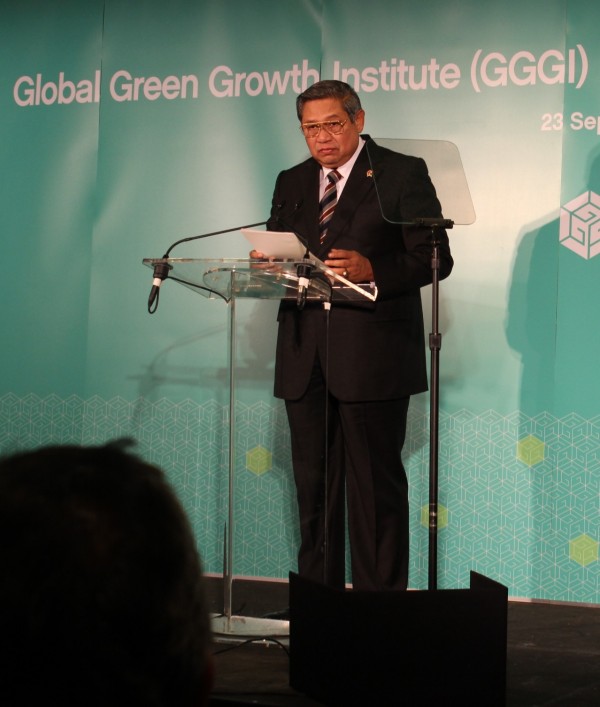 President Susilo Bambang Yudhoyono will be the new President of the GGGI Assembly and Chair of the Council. (image credit: Global Green Growth Institute)

NEW YORK, Sep. 24 (Korea Bizwire) — Susilo Bambang Yudhoyono, President of Indonesia, has been nominated to be the next Chair of the Council of the Global Green Growth Institute (GGGI). President Yudhoyono accepted the nomination at the GGGI Leaders’ Gathering, which was held on the occasion of the United Nations Climate Summit 2014 in New York. The Gathering was attended by a number of high-level officials, including heads of state, such as President Park Geun-hye of Korea.

GGGI leaders also recommended that the GGGI Assembly elect Indonesia to serve as the body’s President at its next session in November, which will effectively allow Mr. Yudhoyono to serve in that capacity as well. This will occur after the expiration of current President Bharrat Jagdeo’s term at the end of the year.

The Assembly is GGGI’s supreme organ and is composed of all GGGI Members. It is responsible for electing Members to the Council, appointing the Director-General and advising on the overall direction of GGGI’s work. The Assembly will vote to confirm President Yudhoyono’s positions at a meeting in November, upon which he will formally assume the duties of the offices.

“I would like to take this opportunity to express my sincere gratitude to the GGGI, for nominating me for President of the Assembly and Chair of the Council,” said President Yudhoyono.

“I see this nomination as an opportunity for action — for service to the cause of inclusive and sustainable growth. I regard it also as recognition of what Indonesia has achieved in mainstreaming green economy in its development,” the President said.

Mr. Yudhoyono’s nomination for the position was unanimously accepted by GGGI leaders. Korea, as host country, was represented at the Gathering by President Park.

“I would like to sincerely congratulate President Yudhoyono, a world-class leader who has led Indonesia for the past 10 years. I firmly believe that GGGI will further develop under the new leadership of President Yudhoyono. Korea will actively cooperate and support GGGI as well,” said President Park.

“I am happy to support President Yudhoyono’s nomination. Under his stewardship, Indonesia started world-leading, ambitious action to show that sustainable land use and economic growth are compatible objectives. I know that he can bring his vast experiences to help GGGI serve its Members in their work to catalyse inclusive green growth,” said President Jagdeo.

As Council Chair, Mr. Yudhoyono will be replacing former Danish Prime Minister and current leader of the Liberal Party of Denmark, Lars Lokke Rasmussen, who announced in June that he will be stepping down from the position.

“I am extremely satisfied to leave GGGI in the capable hands of my soon-to-be successor President Susilo Bambang Yudhoyono of Indonesia. I am confident and optimistic that his commitment to and experience with green growth will make GGGI stronger than ever,” said Chairman Rasmussen.

The Council is the executive organ of GGGI and is responsible for directing the organization’s activities, including approving GGGI’s strategy, its annual work program and budget and reviewing the results. The Council consists of a mixture of GGGI Member countries and non-state actors, as well as the GGGI Director-General.

“Under his leadership, GGGI will strengthen its contribution to developing countries’ economic growth and climate resilience.”

Based in Seoul, GGGI is an intergovernmental organization founded to support and promote a new model of economic growth known as “green growth.” The organization partners with countries to help them build economies that grow strongly and are more efficient and sustainable in the use of natural resources, less carbon intensive, and more resilient to climate change. GGGI’s experts are already working with governments around the world, building their capacity and working collaboratively on green growth policies that can impact the lives of millions.