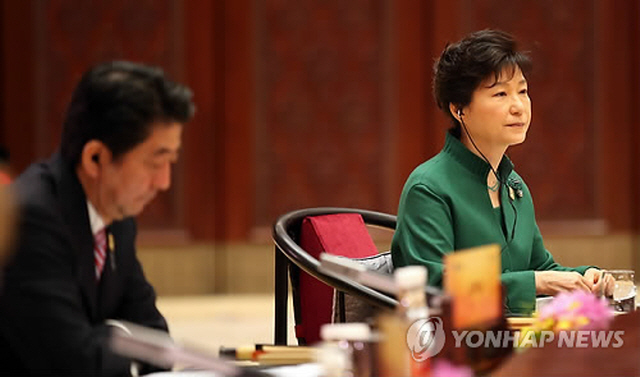 Park has so far shunned a bilateral meeting with Abe due to disputes over shared history, including the Japanese military’s sexual enslavement of Korean women during World War II.

The issue of comfort women has long been one of the key sticking points in bilateral relations. The matter has gained urgency as the victims are dying off. In 2007, more than 120 South Korean victims were alive, but the number has since dropped to 47, with their average age standing at nearly 90.

There is widespread speculation that the summit is unlikely to produce any breakthrough in the issue of comfort women as the two sides are still at odds over it.

South Korea demands Japan acknowledge its responsibility for the sex slaves, while Japan insists the issue was settled under the normalization treaty of 1965.

“It is difficult to expect any dramatic accomplishments,” said Lee Won-deog, a Japan expert at Kookmin University. He said the summit itself could be “a step toward normalization.”

Cho Sei-young, a diplomat-turned-professor at Dongseo University in Busan, warned that the summit could backfire if South Korea is obsessed with producing an accomplishment at a time when conditions are not mature enough to address the issue head-on.

The planned meeting comes a day after Park is set to host a meeting with Abe and Chinese Premier Li Keqiang in what could be the resumption of a trilateral summit among the three neighbors in three years.

A trilateral summit has not been held since 2012 due to a territorial dispute between China and Japan, as well as Japan’s attempts to whitewash its wartime atrocities and colonial occupation.

Japan ruled the Korean Peninsula as a colony from 1910-45 and controlled much of China in the early part of the 20th century.

The three leaders are expected to hold in-depth talks on how to strengthen substantial cooperation in a wide-range of issues and exchange opinions on regional and international issues.

On the summit’s sidelines, Foreign Minister Yun Byung-se will hold separate talks with his Japanese and Chinese counterparts, Fumio Kishida and Wang Yi, according to the Foreign Ministry.