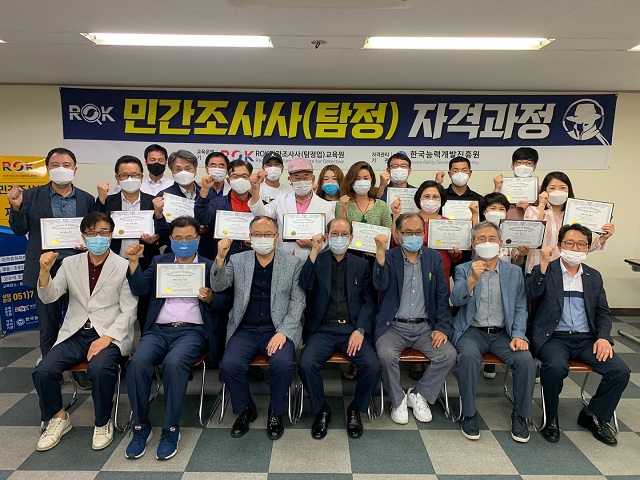 Students of a private investigator academy pose for the camera in this file photo provided by the academy.

A revision of the Credit Information Use and Protection Act is to take effect on Wednesday, removing the ban on the use of the term “private investigator,” called “tamjeong” in Korean, in business or personal titles, according to the National Police Agency (NPA).

Despite deregulation, however, the scope of private investigators’ activities will be strictly regulated due to the need to protect private information and prevent privacy infringement, the NPA said, vowing to crack down on illegal operations of private detective service providers.

Contrary to public perception, private investigators will still be prohibited from collecting evidence in criminal and civil cases and locating the whereabouts of fugitive offenders, the agency said.

They will also be banned from collecting evidence on cases under investigation or trial and from gathering data to prove a spouse’s cheating, for instance, it explained.

Likewise, tracking down the whereabouts of runaway debtors or spouses can run counter to the Personal Information Protection Act, it said.

The NPA said private investigators’ activities permitted under the revised law include finding the locations of runaway children and youth and missing persons.

Collection of published official information on behalf of clients and confirmation of the locations of stolen, lost and hidden properties will continue to be allowed regardless of the legal revision, it added.

The police agency asked clients to be careful not to entrust private detectives to conduct illegal missions.

One thought on “Private Detective Businesses Permitted Beginning This Week”