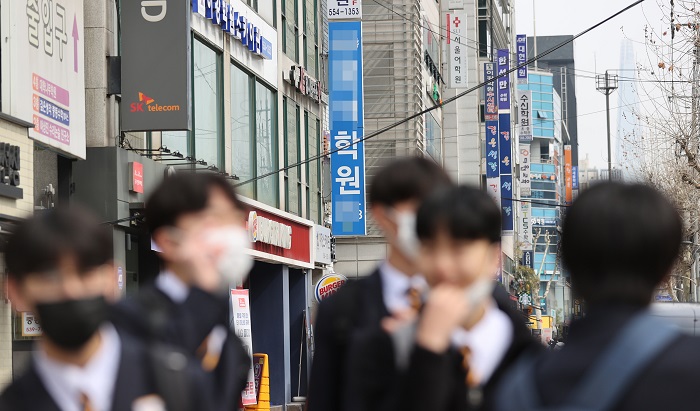 This photo, taken March 4, 2021, shows students at a district with many cram schools in southern Seoul. (Yonhap)

Total expenditures on private education for primary, middle and high school students amounted to 9.3 trillion won (US$8.1 billion) last year, down 11.8 percent from a year earlier, according to the data compiled by Statistics Korea.

The average monthly spending on private education per student reached 289,000 won last year, down 10.1 percent from a year earlier and the first decline ever.

Some 67 percent of students received private education last year, down 7.9 percentage points from a year earlier.

South Korean parents’ enthusiasm about education for their children is known to be extremely high as education is widely seen as the key to success in Korean society.

But the new coronavirus outbreak put a dent on some households’ incomes and delayed the opening of a new school year last year, reducing spending on private education, according to the statistics agency.

Double-income families spent an average of 314,000 won per month on private education last year, larger than 279,000 won for households having fathers as breadwinners. 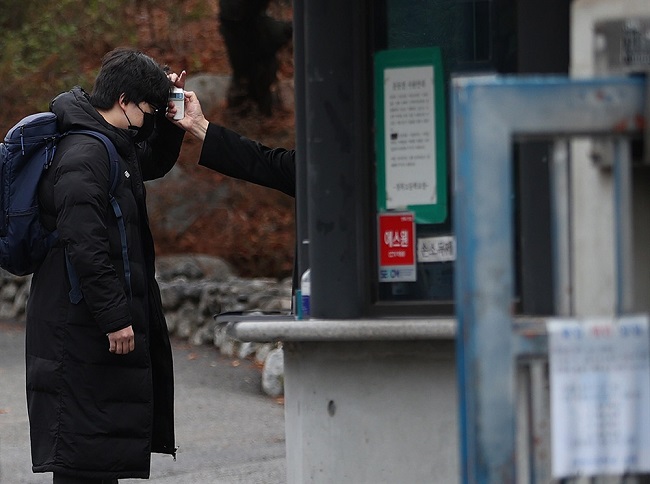 A student has his temperature checked before entering school at Kyungbock High School in Seoul on March 2, 2021. (Yonhap)

Although the nation’s total spending on private tutoring decreased, high school students were found to have received more private education and spent bigger amounts than they did a year ago.

The Ministry of Education attributed the increase in spending to the fact that insufficient in-person instruction due to the pandemic led to greater reliance on private teaching among high school students who were under greater academic pressure ahead of the college entrance exam.

In a separate press release, the ministry said it will actively seek measures to meet academic demands from high school students in particular, such as providing academic consulting services for individual students and better education materials to be used at schools.

It will also push for legislation that mandates colleges’ acceptance of students from disadvantaged and poor family backgrounds to narrow widening educational gaps.

The ministry said it will work to enhance the quality and engagement level of online education and step up monitoring of tutoring fees at private education institutes.