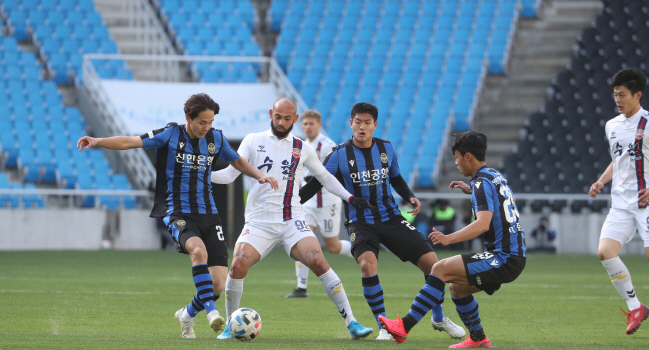 A practice match between Incheon United (in blue) and Suwon FC takes place at Incheon Football Stadium in Incheon, 40 kilometers west of Seoul, on April 23, 2020. (Yonhap)

SEOUL, April 24 (Korea Bizwire) — After more than two months of delay caused by the coronavirus outbreak, the South Korean men’s professional football season will kick off on May 8.

The Korea Professional Football League (K League) announced Friday that its top-flight K League 1 and the second-tier K League 2 will both begin their 2020 season on May 8.

The decision was reached during the league’s meeting with club representatives in a board meeting at the league headquarters in Seoul.

The season was slated to begin on Feb. 29, but the start was postponed five days prior to that date because of the raging coronavirus.

The K League said there will also be matches on May 9 and 10, and specific matchups and kickoff times will be announced next week.

They will first play 22 matches and then will be divided into two tiers, the top six getting grouped into Final A and the bottom six falling into Final B. Then teams will play five matches within their group.

There’s a new twist to the relegation system this year.

The city of Sangju, some 270 kilometers southeast of Seoul, is looking to found a new pro club, as its host city contract with the K League 1′s military club Sangmu is set to expire this year.

If Sangju gets a new team and Sangmu settle in a new city, then both teams will end up in the K League 2 in 2021.

The 11th-ranked team in the K League 1 and a playoff winner from the K League 2 will then meet in a promotion-relegation playoff, with the loser going to the second division for 2021.

If Sangmu stay out of the K League 1 cellar this year, then the two worst teams will be sent down to the K League 2 without a playoff. They will trade places with the K League 2 champions and the playoff-winning team.

Thanks to a recent decline in new COVID-19 cases and the government’s easing of social distancing guidelines, the K League has been able to move closer to the new season.

On Monday, the league announced clubs will now be allowed to play practice matches against one another — they’d been limited to practices and intrasquad matches since March — and also introduced safety guidelines for teams and media. 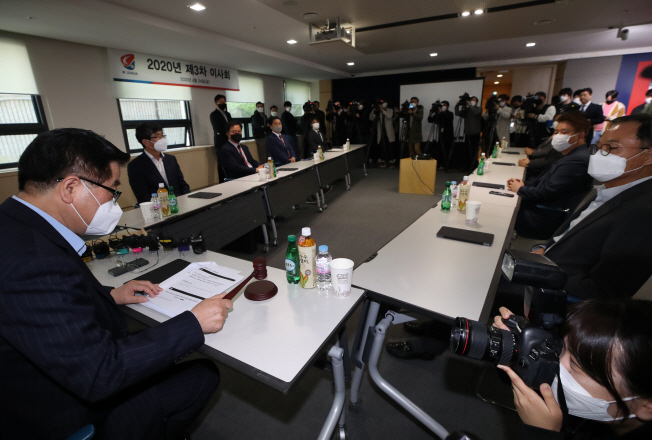 Friday’s meeting was only the league’s second with team officials since Feb. 24, when the season was postponed.

Following its first meeting with team reps on March 30, the K League said playing without fans wasn’t an option, because if it wasn’t safe enough to have spectators in the stands, then players, coaches and referees would still be vulnerable to infection.

But with the number of new cases staying around single digits of late, the K League felt it could go ahead playing before empty seats.

Coaches and other match-day personnel must wear masks, and players are banned from talking to their teammates, opponents or referees during matches.

If a player or a coach is diagnosed with the coronavirus during the season, that club will be kept off the field for at least two weeks.

And the team’s recent opponents may also be shut down for a minimum two weeks, depending on the results of contact tracing.

In such cases, the league office will reserve rights to adjust match fixtures.

If a player or a coach shows COVID-19 symptoms, the team will still go ahead and play without the ailing individual.

Should the K League 1 be forced to scrap its season because of COVID-19, the championship and other awards will presented only if teams have played at least 22 matches.

But if the season is canceled before the 22-match mark, then no champions will be crowned. Team and individual stats will still count in the record books.