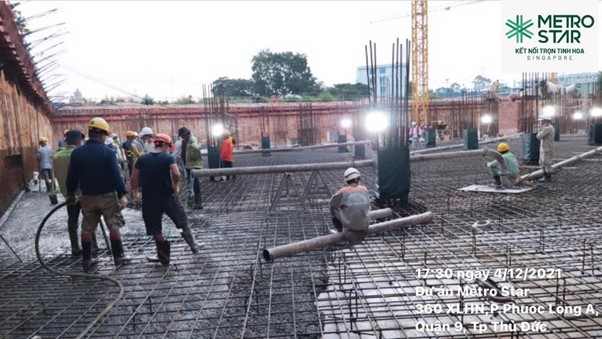 HO CHI MINH CITY, Vietnam, Dec. 17 (Korea Bizwire) — In addition to accelerating the construction progress throughout the day and night in order to soon hand over in 2022, the Metro Star project has also achieved a series of important progress in legality, affirms that the project site is no longer public land.

Transportation and Public Works Company Limited was assigned to implement this project on July 25, 2005, according to the Prime Minister’s Steering Committee 80. The project was licensed for construction in 2008 and the foundation was completed in 2012. According in Decision 3246/QĐ-UBND dated July 2, 2015 of the People’s Committee of Ho Chi Minh City, the project has undergone enterprise valuation for equitization and held an auction to sell shares widely to people and businesses on to the Ho Chi Minh City Stock Exchange (HOSE). Since that time, the project site has been off-limits to the public land.

In 2016, Metro Star Investment Joint Stock Company was transferred the project from Transportation and Public Works Joint Stock Company, which became a private company under the State’s equitization process. According to Decision No.5268/QĐ-UBND dated October 7, 2016 of the People’s Committee of Ho Chi Minh City: a construction permit and approval and completion of the foundation. The Project’s transfer must be announced on the mass media, specifically in three consecutive newspaper editions 15 days before to the transfer, and without any complaints.

The Metro Star project has also fulfilled its financial obligations for the entire land area, and was re-issued the long-term residential land use right certificate No. CT80499 on June 15, 2020; has also been approved in the housing development plan in Document No. 1757/QĐ-UBND dated May 8, 2019 by the People’s Committee of HCM City, with 1,468 apartments recorded in the Metro Star project. Notice No.218/TB-VP dated March 30, 2021 issued by the People’s Committee of Ho Chi Minh City clearly stated that the project is eligible to be sold or leased in the future.

Currently, Metro Star is speeding up the construction progress in order to promptly hand over shophouses and apartments in 2022 before the first Metro Line of Ho Chi Minh City is completed and put into operation.