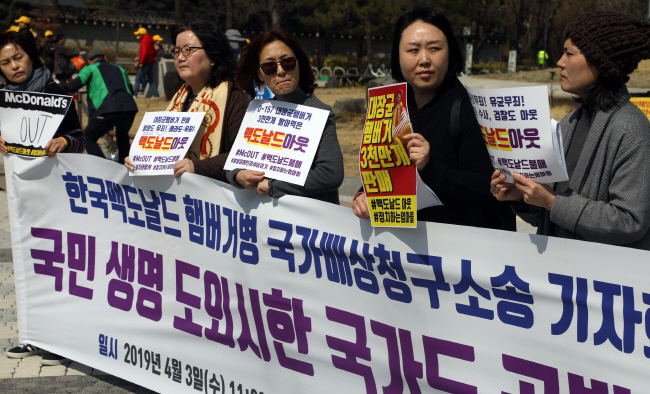 A civic group holds a press conference in front of the presidential office Cheong Wa Dae on April 3, 2019, accusing McDonald’s Korea of being responsible for the so-called burger patty scandal. (Yonhap)

SEOUL, Oct. 25 (Korea Bizwire) — The prosecution has decided to reinvestigate the local unit of McDonald’s over allegations that undercooked burgers sold at its restaurants caused illness among some customers, officials said Friday.

Reversing its 2018 decision to drop the related charges, state prosecutors said they will resume the probe into the so-called burger patty scandal over a complaint filed by groups of consumer rights activists in January.

Public uproar over the scandal began in July 2017, when the mother of a 5-year-old girl filed a complaint accusing McDonald’s Korea of being responsible for her child’s incurable kidney disease.

The mother claimed her daughter was diagnosed with hemolytic uremic syndrome (HUS) after eating one of its burgers served with an undercooked patty. The girl has to receive a kidney dialysis for the rest of her life.

As a series of similar complaints followed, the prosecution launched an investigation into the allegations, looking for a possible correlation between the disease and undercooked meat.

But in February 2018, state prosecutors decided not to file charges against the fast food chain, citing insufficient evidence to back the accusations.

The prosecution only indicted three officials from a McDonald’s burger patty supplier for violating hygiene control and food safety regulations.

In January, nine groups of activists lodged a complaint with the prosecution against McDonald’s Korea, the patty supplier and government officials over several charges including violation of the food safety law and injury stemming from negligence.

A ruling party lawmaker raised allegations that McDonald’s might have pressed its officials to make false statements over the incident during the prosecution’s previous probe. The fast food chain has denied the allegations.