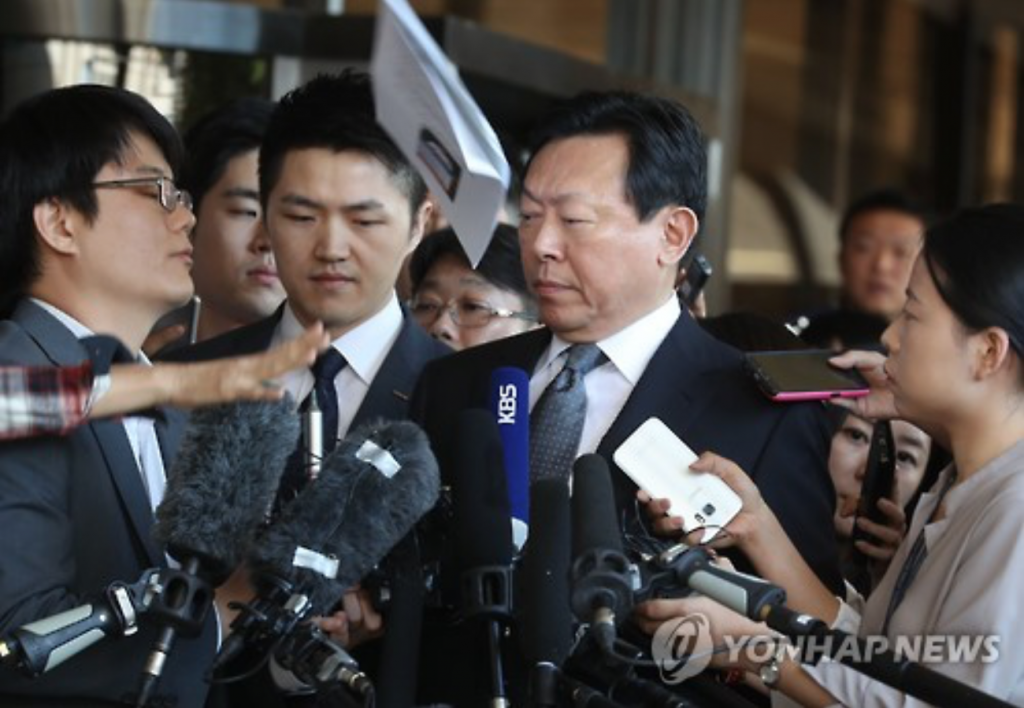 A bunch of papers is hurled by a protester at Shin Dong-bin (C), chief of the embattled South Korean retail giant Lotte Group, as he arrives at the Seoul Central District Prosecutors’ Office on Sept. 20, 2016, to face questioning over the group’s alleged slush funds and embezzlement. (image: Yonhap)

SEOUL, Sept. 26 (Korea Bizwire) – A warrant is being sought to formally arrest the chief of the embattled South Korean retail giant Lotte, prosecutors said Monday, as the high-profile corruption probe into the country’s fifth-largest conglomerate nears its conclusion.

The Seoul Central District Prosecutors’ Office submitted the request to a local court to detain Shin Dong-bin, 61, on charges of embezzlement and breach of trust.

Shin is suspected of orchestrating a series of shady deals between the group’s affiliates, as well as getting involved in alleged slush funds valued at some 30 billion won created by the conglomerate’s construction arm over the last decade.

Prosecutors suspect that the amount of money transacted illegally under Shin’s direction hovers around some 170 billion won (US$154 million).

The latest legal action came about a week after the business tycoon was summoned by prosecutors Tuesday, becoming the first incumbent chairman to be a criminal suspect in the group’s decadeslong history.

Prosecutors here have been looking into Lotte’s alleged wrongdoings since they launched full-fledged raids into the group’s headquarters in June.

Since the launch of the investigation, prosecutors have called in a number of high-level executives at Lotte who are suspected of being involved in the massive corruption scheme.

Earlier this month, Shin’s older brother Dong-joo was quizzed over allegations of embezzling some tens of billions of won from the group’s major affiliates.

In the following week, prosecutors carried out the questioning of the brothers’ father and group founder Shin Kyuk-ho at his office in Hotel Lotte in Seoul.

The Seoul Central District Court will hold a hearing later this week to decide whether to issue the warrant to arrest the incumbent chairman.