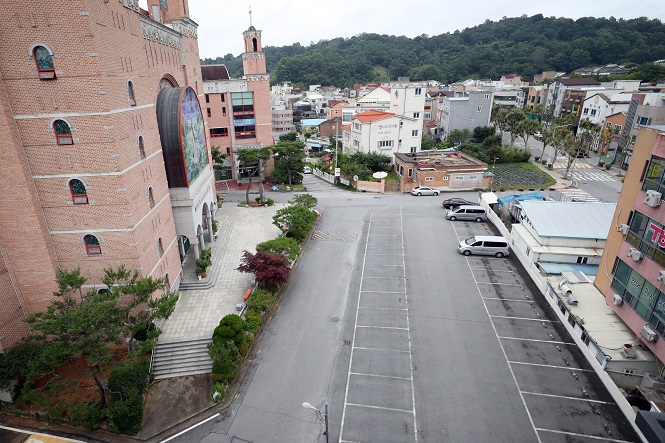 In this photo taken on July 5, 2020, a Protestant church in Gwangju is closed after some of its followers have tested positive for COVID-19. (Yonhap)

SEOUL, July 9 (Korea Bizwire) — The South Korean government’s recent ban on small gatherings and meetings in churches has brought about a strong backlash from the Protestant community amid rising concerns over a second wave of the novel coronavirus infection stemming from religious facilities.

On Wednesday, the health authorities said Protestant churches will be barred from hosting small bible classes, choir practices and lunch services from Friday.

Churches also must use QR-code based entry logs to keep records of worshipers who participate in services, while congregations will be prohibited from singing or praying loudly.

The United Christian Churches of Korea (UCCK), one of the biggest associations of Protestant churches in South Korea, released a statement on the day and demanded the government lift the ban.

“The authorities overlook the point that what matters is not the gatherings themselves, but whether their participants comply with quarantine guidelines or not,” the UCCK statement read.

“The ban is contrary to churches’ concerted efforts to prevent the spread of COVID-19.”

The UCCK said it has already asked its member churches to cancel, downsize or postpone all summer events, including bible camps, in a bid to join the government-led preventive campaign.

Another Protestant group, the Communion of Churches in Korea (CCIK), also opposed the government’s decision, claiming that churches have done their best to follow safety measures.

“We cannot accept the measures as they labeled the whole Protestant community a hotbed for the virus spread,” the CCIK said. 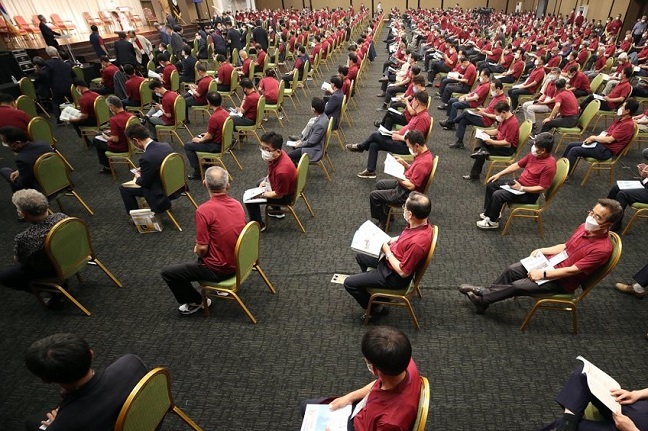 Elders of the Presbyterian Church of Korea (PCK) maintain a distance from one another during a PCK national retreat at a hotel in Gyeongju, North Gyeongsang Province, on July 8, 2020. The event took place after three temperature checks, two rounds of sanitization of the whole body and hands, and ID registration. (Yonhap)

On the other hand, some Christian leaders are asking congregants to respect the instructions as a way to help the country overcome the pandemic.

The government’s toughened measures came as the number of daily new virus cases has hovered around 50-60 for weeks, most of which are community infections from small religious meetings and business marketing events.

After monthslong suspension of on-site services, the religious community resumed official services and worships on Sundays starting in early May, as well as small gatherings and events on weekdays.

But those meetings have emerged as new infection clusters in South Korea, while a Catholic church and a Buddhist temple also reported confirmed cases in recent days.

About 10 people linked to Wondang Catholic Church, located in Goyang, just northwest of the capital, have tested positive for the coronavirus, while almost 100 cases have been related to Gwangleug Temple in Gwangju, some 330 kilometers southwest of Seoul.