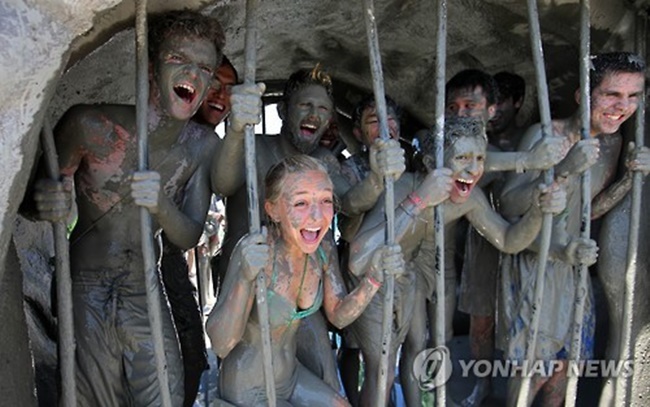 In this file photo, mud-covered tourists pretend to be trapped inside a prison at the Daecheon Beach Mud Plaza in the city of Boryeong on South Korea’s west coast on July 17, 2015, as they take part in the Boryeong Mud Festival. (Image: Yonhap)

Psy will hold a concert July 25 at Daecheon Beach, 170 kilometers southwest of Seoul, the venue for the mud festival, celebrating its 20th year, according to Boryeong City. This year’s festivities will be held from July 21-30.

The singer, star of the 2012 smash hit “Gangnam Style,” released his eighth full-length album in May, performed at last year’s opening of the event.

Both concerts by the two singers will be free, according to city officials.

“The festival was a big hit last year, drawing in a crowd of 4 million, including 439,000 foreigners,” said Mayor Kim Dong-il. “We plan to increase the number of attendees to 5 million by preparing richer programs.”