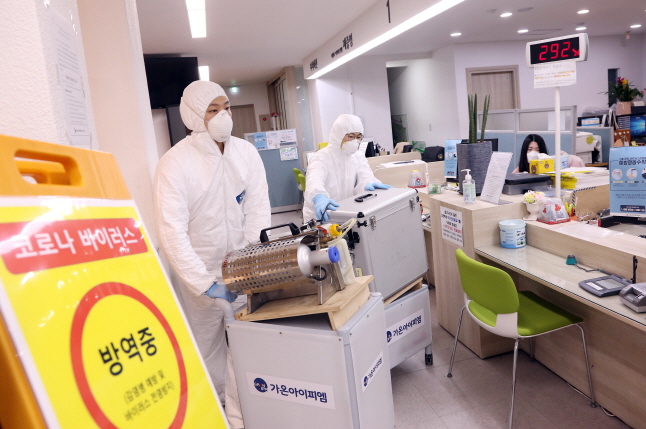 A disinfection operation under way at a community center in southern Seoul. (image: Songpa Ward)

SEOUL, Feb. 5 (Korea Bizwire) — An increasing number of public and welfare facilities in Seoul and the surrounding Gyeonggi Province have been halting operations amid growing fears over the spread of the new coronavirus, officials said Wednesday.

Songpa Ward in southeastern Seoul, for instance, has suspended all culture, sports and hobby programs offered by its 27 community centers for residents and temporarily closed all senior citizen centers in its district, they said.

The ward has also instructed all libraries and welfare facilities in its jurisdiction not to run extra programs for residents for the time being.

Gangbuk Ward in northern Seoul has decided to temporarily close a public sports center and a culture information library until Feb. 15, while 60 public facilities in Yeongdeungpo Ward in southern Seoul will be shut until Feb. 16.

The Seoul Human Resources Development Center in Seocho Ward in southern Seoul has decided not to rent its sports facilities, including soccer field and tennis court, to citizens for about one month.

Other wards in Seoul are reportedly mulling similar temporary closures of public and welfare facilities to help stop the spread of the viral disease.

In addition, almost all wards in the capital have been regularly conducting disinfection operations at their community centers and public facilities.

Goyang, a Gyeonggi Province city on the northern outskirts of Seoul, said it will close eight of its municipal welfare centers until next Monday.

A variety of culture programs and fitness centers run by the welfare centers used to be very popular with Goyang residents.

Goyang’s welfare centers had provided free face masks and sanitizer to its users and monitored their body temperatures prior to the municipality’s decision Tuesday to shut their operations.

Almost all other cities in Gyeonggi, including Suwon, Seongnam, Siheung and Gunpo, have taken similar measures, including the temporary closure of public facilities, to help prevent the spread of the virus.