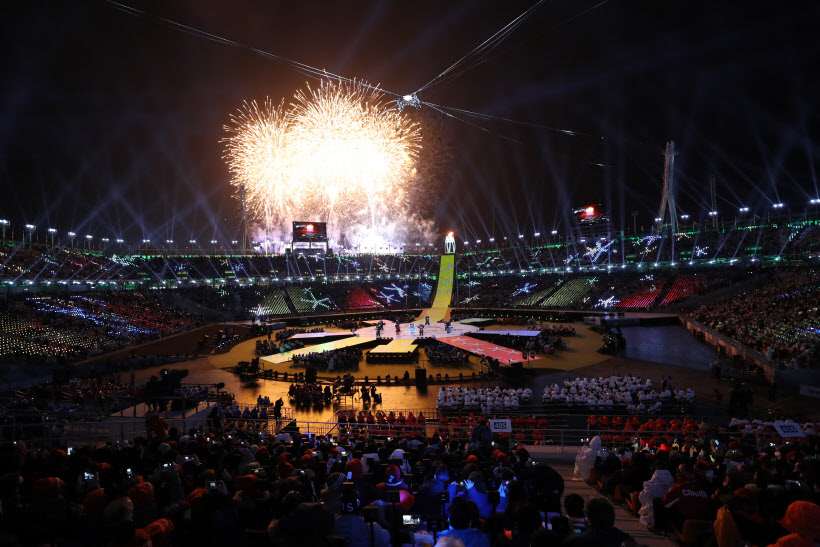 Fireworks go off at PyeongChang Olympic Stadium at the start of the closing ceremony for the 2018 PyeongChang Winter Paralympics in PyeongChang, Gangwon Province, on March 18, 2018. (image: Yonhap)

“When I visited Paralympics or sports events in foreign countries, I envied people’s support for para athletes,” Lee said at a press conference in PyeongChang, some 180 kilometers east of Seoul. “But for this PyeongChang Paralympics, I think our South Korean people really showed big support.”

The first Winter Paralympics in South Korea will wrap up the 10-day competition with the closing ceremony later Sunday. Lee said the Paralympics is not just another sports event but is an event that can develop an environment for the disabled in the country.

“South Korea should not be an advanced country just in terms of the economy, but its civic awareness and national consciousness should also develop,” he said. “By hosting this Paralympics, I think it’s meaningful that people’s perceptions of disabled sports have changed.”

The PyeongChang Paralympics had the largest ticket sales among all editions of the Winter Paralympics. The International Paralympic Committee (IPC) said nearly 343,000 tickets have been sold for PyeongChang 2018, smashing the previous record of 316,200 sales set at Sochi 2014.

Under massive support from the home crowd, South Korea earned one gold and two bronze medals to finish 16th, its best ever Winter Paralympics performance.

“To maintain our athletes’ good performance, we need support in various areas,” Lee said. “The country still doesn’t have enough sporting facilities for the disabled. The KPC will work closely with the government to enhance the environment.”

“I first want to thank South Korean crowds’ support at this Paralympics,” he said. “It still feels like a dream that we won a gold medal. I believe there will be many athletes like Sin if our para athletes can get more attention and support.”