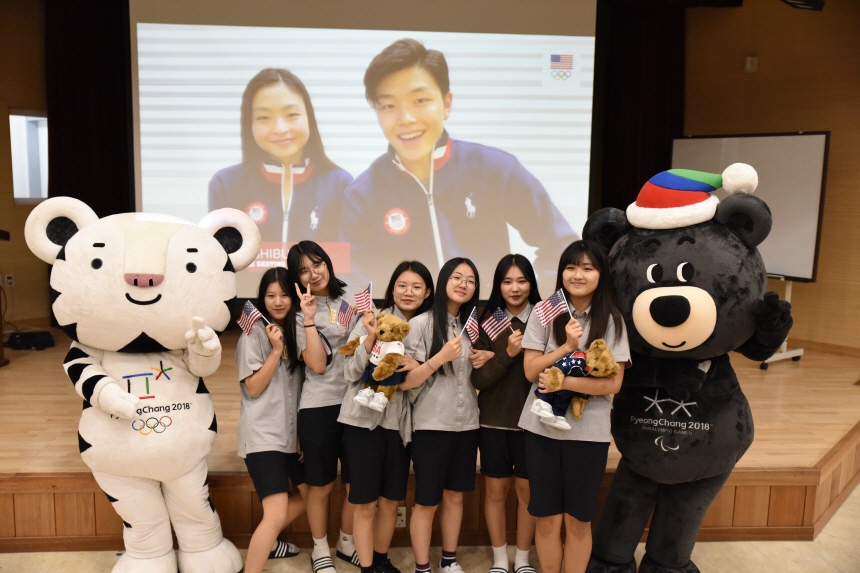 SEOUL, Aug. 22 (Korea Bizwire) — The organizing committee for the 2018 PyeongChang Winter Olympics and the United States Olympic Committee (USOC) on Tuesday announced their launch of a Korean youth mentorship program.

In a statement, the organizations said the goodwill campaign is part of the USOC’s “Thank You, PyeongChang” initiative, designed to “contribute to the positive legacy” of the first Winter Olympics to take place in South Korea.

In the mentorship program, American ice dance tandem of Maia and Alex Shibutani will mentor students at Jinbu Middle School in PyeongChang, some 180 kilometers east of Seoul, through virtual lessons. The three-time world championship medalists and 2014 Olympians will visit the school in February, when they’ll be in South Korea for the Olympics.

Jinbu students will teach the figure skaters about Korean culture and about what athletes can expect at PyeongChang 2018.

According to the two organizations, learning what the South Korean students share will be incorporated into the Team USA Ambassador Program, athlete training sessions that all members of the 2018 U.S. Olympic and Paralympic teams will attend prior to the competitions.

“Maia and Alex personify the spirit of the Olympic Movement and are excellent ambassadors to represent Team USA in this youth mentorship exchange with the students of Jinbu Middle School,” USOC CEO Scott Blackmun said in a statement. “We are grateful for the partnership of the PyeongChang organizing committee’s education team in facilitating this connection with the school. Team USA is thrilled to be working with and learning from a middle school that is at the heart and soul of PyeongChang.”

The Shibutanis, who are siblings, will host a series of monthly mentorship sessions with students via video chat starting next month.

“We are so excited to be mentors to students who could be the next generation of Olympians in Korea,” said Alex Shibutani, 26. “We’re very passionate about the Olympic Movement and the Olympic values, and we believe in their power to inspire and unite younger generations throughout the world. To be able to share this passion with the students of Jinbu Middle School is a huge honor.”

Maia, who’s three years younger, said getting a chance to learn about Korean culture and connect with children in PyeongChang “is very special.”

“We can’t wait to get to know them and share what we learn with our Team USA teammates, as well as share our experiences as Olympians and Team USA’s excitement to be in PyeongChang,” she said.

The brother-sister duo released a video on Tuesday, telling the students about their excitement for the program and for an opportunity to compete in South Korea next year.

Lee Hee-beom, the chief organizer of PyeongChang 2018, said the mentorship program is “a wonderful addition to the work we are doing with schools across the country.”

“This is an amazing opportunity for the pupils of Jinbu Middle School to interact, learn from and then meet Olympic athletes from the United States,” Lee added. “We hope that this will inspire many of them to take up winter sports and also give them a better understanding of Olympic values.”