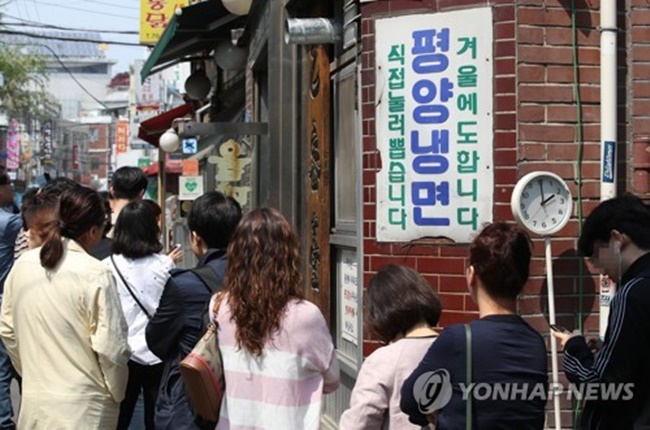 Customers line up for Pyongyang “naengmyeon” during lunchtime at a popular restaurant for the cold North Korean-style noodles in Mapo, western Seoul, on April 27, 2018. (Image: Yonhap)

SEOUL, April 27 (Korea Bizwire) – It’s been announced that South Korean President Moon Jae-in and North Korean leader Kim Jong-un will be slurping up cold noodles made by an exceptional cook from Pyongyang in their banquet later in the evening as part of Friday’s historic summit.

But some South Koreans were hours ahead of them as they scrambled during lunchtime to have a taste of the chilled noodles, known as Pyongyang ”naengmyeon,” partly in celebration of the first meeting of the two leaders.

Popular North Korean-style naengmyeon restaurants in Seoul were flooded with customers lining up to have a bowl for lunch.

“We definitely have more customers today thanks to the summit,” said a worker at Pildong Myunok, a restaurant run through three generations touted as a must-go place for naengmyeon lovers. “(The flow of customers) is almost the same as what we usually have in the middle of summer.”

Bongpiyang, another popular Pyongyang cold noodles restaurant in eastern Seoul, also saw its parking lot run out of space within minutes after people flocked there for lunch.

“Cars just kept on coming in even though we had no more room,” a Bongpiyang employee said.”

A 42-year-old man who identified himself as Park said he and two other colleagues “naturally” decided to eat Pyongyang naengmyeon after they watched the live coverage of the summit in their office.

At Jeongin Myunok in Yeuido, Seoul, some shouted with joy when they were called by the staff for their turn.

“Wow, let’s try Pyongyang naengmyeon,” one of them said out loud. “Let’s eat them with Kim Jong-un.”

Pyongyang naengmyeon is a dish of noodles made out of buckwheat in a light soup. It’s a popular dish loved by many South Koreans.

In his opening remarks at the summit, Kim casually mentioned Pyongyang naengmyeon, for which he said his crew “made dire efforts to carefully deliver them from the North,” stirring brief laughter among the officials.