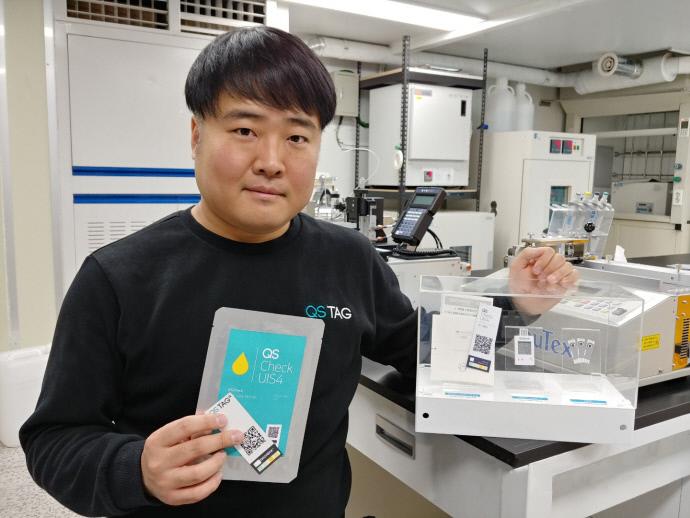 SEOUL, June 17 (Korea Bizwire) — In the midst of the novel coronavirus pandemic, health concerns have been growing among citizens.

Out of fear of catching the virus, more and more people are increasingly reluctant to visit medical clinics, which is why South Korean bio startup QSTAG pins high hopes on self-care test kits.

QSTAG aims to provide comprehensive digital health care with easy but affordable monitoring and diagnostic methods based on QR code technology, according to its chief Lee Dong-hoon.

“Detecting and ultimately diagnosing a disease can be easily done through our platform,” Lee told Yonhap News Agency on Friday. “The QR code is used for the first time in such methods for more precision.”

Founded in 2016, QSTAG has an ambitious goal to ultimately develop diagnostic devices and biomarkers that can test diseases ranging from diabetes to infectious diseases, such as the COVID-19 virus at home.

The 37-year-old entrepreneur says QSTAG’s products are equipped with highly sensitive biosensors that are different from other diagnostic tools, such as home pregnancy kits, on the market.

Among the lineup of products is a disposable urine test strip, named the QS Check-UIS, that can test glucose, blood, protein and PH balance in urine to detect any abnormal sign in the body.

The strip, installed with a QR code, is then scanned with a mobile application named QS Reader — available both on Google’s Play Store for Android devices and Apple’s App Store for iPhones — for quick analysis.

“What sets QS Check-UIS apart from other conventional urinary strips is that usage is very simple and the analysis is more accurate as the result of conventional strips are often checked with the naked eye,” Lee said.

The result of the urinalysis can also be accumulated on the QS Reader so that the statistical data can later be used for all medical treatment and diagnoses, Lee said.

This photo, provided by South Korea-based biotech startup QSTAG, shows the company’s QS-Check+, an electrochemical-based disposable kit loaded with an immunologic biosensor that can detect a specific type of virus or protein.

The strip, with a price tag of just 5,500 won (US$4.50), successfully underwent clinical trials and received approval from the country’s drug safety watchdog, the Ministry of Food and Drug Safety.

The second product under development is called QS-Check+, an electrochemical-based disposable kit loaded with an immunologic biosensor that can detect a specific type of virus or protein.

“The prototype is under development to diagnose toxemia, but it can be utilized to diagnose other diseases if we just change the antibody of a biosensor,” he said.

Toxemia, also known as preeclampsia, is a condition in pregnancy characterized by abrupt hypertension.

The entrepreneur says a dozen programmers and pathologists are preparing to apply QS-Check+ in managing other infectious diseases, possibly the COVID-19 virus.

“We expect to seek Series A-1 equity financing in the latter half of this year and are preparing to receive approval from overseas health authorities as well,” he said.