Furthermore, the exemption rate for children of high-ranking officials was also high. Among 17,689 direct children subject to conscription, 785 were exempted from service (4.4 percent). (image: Flickr/ Republic of Korea Armed Forces)

The country, which is still technically at war with its northern neighbor, currently practices conscription, and legislation mandates that all men between 18 and 35 years of age complete a period of military service. As of 2016, those enrolled in the army serve 21 months; in the navy, 23 months; and in the air force, 24 months.

But not everyone may be fit for service, and there is room for exemption for those suffering from physical or mental disabilities, those who need to support their family due to extreme poverty, those with criminal records, or those of national merit. Depending on the circumstances, one may still need to perform a different form of civil duty, while others are exempt from service altogether.

However, a recent report by Korea’s Military Manpower Administration (MMA) revealed that military exemption rates were far higher for high ranking government officials, suggesting the lack of morality by those that should set an utmost example, and the disappearing notion of ‘noblesse oblige’ in Korean society.

The report was announced by lawmaker Kim Joong-ro from Korea’s opposition People’s Party, on September 11. Kim was also a former two-star general and the commander of the 70th Infantry Division.

The Korean civil service is based on a grade system, from grade 9 (assistant clerk) to grade 1 (i.e. deputy mayor-equivalent, or heads of each city or provincial government).

According to the report, 2,520 (9.9 percent) of 25,388 grade 4 civil servants and higher subject to conscription were exempted from their military duty, which is a surprisingly high figure considering the average rate of exemption nationwide for all eligible Korean men (H1 2016) was only 0.3 percent.

In addition, 5,722 (22.5 percent) officials were assigned public service, instead of the conventional military duty. Those receiving public service assignments, often due to medical reasons, perform their service time at public facilities such as district courts and subway stations, and the work is much less laborious given that they’re free from physical training, and they can usually commute to their workplace from home. The rate for public service workers in H1 was 10.2 percent, half of the rate for government officials.

Furthermore, the exemption rate for children of high-ranking officials was also high. Among 17,689 direct children subject to conscription, 785 were exempted from service (4.4 percent).

However, referencing the latest report, a ministry official said that “in the past, Korea had abundant manpower resources, and thus higher exemption rates, and there have been loopholes in the physical examination (to check eligibility of service) process.”

“It is not reasonable to compare the rate for high ranking officials to the one we have now.”

To add to the comment, the MMA said that the exemption rate for the general public in the same age group as government members subject to the repot, was in fact higher at 26.1 percent. 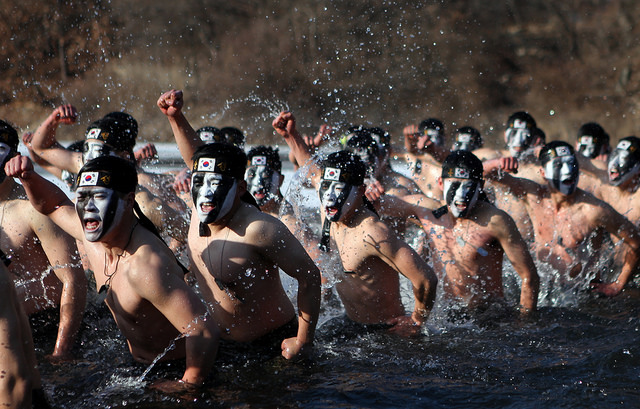 “The fact that high-ranking officials and their children, who are supposed to set an example to other members of the society, are being exempt from their rightful duties can induce a sense of deprivation to Korean youths who faithfully carry out their duties.” (image: Flickr/ Republic of Korea Armed Forces)

Despite the explanations, the public isn’t convinced, with many claiming instead that a large portion of the general public was judged unfit for service due to insufficient educational background (up to high school dropouts in the past) and extreme poverty in the past; therefore, comparing the rate with ordinary citizens may create a bias.

Meanwhile, among those exempt from service, “illness” was the most common reason for exemption at 74.8 percent (1,884). Excessive myopia (420) was most prevalent among illnesses,  followed by weight disorders (123), herniated nucleus pulposus (88), and tuberculosis (47).

Among the children of high-ranking officials who were exempt from service, illness also played a leading role (726) with unstable large joints (50) as the dominant disease, followed by visual impairment (15), inflammatory bowel disease (13), and glomerulonephritis (11).

Unstable large joints refers to ligament injuries in the knees, similar to anterior cruciate ligament injuries, and the condition has been cited as a priority-evaluation illness by the MMA for its dishonest use as an excuse for military exemption.

“The fact that high-ranking officials and their children, who are supposed to set an example to other members of the society, are being exempt from their rightful duties can induce a sense of deprivation to Korean youths who, on the other hand, faithfully carry out their obligations,” said lawmaker Kim.