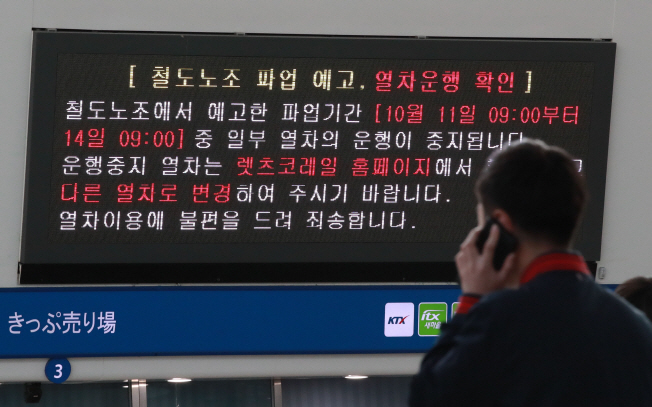 An electronic signboard at Seoul Station displaying messages advising passengers to check their train schedules ahead of the railway labor strike on Oct. 10, 2019. (Yonhap)

Around 82 percent of the country’s regular rail services were under operation as of 4 p.m., according to the Korea Railroad Corp. (KORAIL) and the Ministry of Land, Infrastructure and Transport.

The KTX bullet train was operating at 77.8 percent of the normal level, while that of subways was around 90 percent.

Around 30 percent of the union members are participating in the three-day strike, the ministry added.

On the other hand, Seoul subway lines 1, 3 and 4, which are jointly operated by Seoul Metro and KORAIL, suffered some delays.

The ministry said earlier that around 20 to 60 percent of passenger and cargo train services are forecast to be affected by the labor action.

Intercity subway operations will be reduced to 88.1 percent of normal operations, while high-speed train services and the KTX bullet train will operate at 81.1 percent and 72.4 percent of the normal level, respectively.

Around 60 percent of the Saemaeul and Mugunghwa trains will be in operation, while cargo train operations will be most affected, with only 36.8 percent in service.

The transportation ministry and KORAIL plan to add more trains to intercity subways and KTX trains to minimize the fallout from the service disruption.

KORAIL also plans to advise passengers to use buses for affected routes and prioritize exports and imports for cargo operations.

“We will refund all services that have been stalled due to the strike. Please check in advance whether the train you are using will be operating,” a KORAIL official said.

Passengers can check the revised schedules at major railway stations. The information is also available on the KORAIL website (www.letskorail.com) and the company’s mobile app “KORAIL Talk.”

The labor strike, which will run for 72 hours from 9 a.m. Friday to 9 a.m. Monday, is the first strike in three years, following a 74-day strike between September and December 2016. 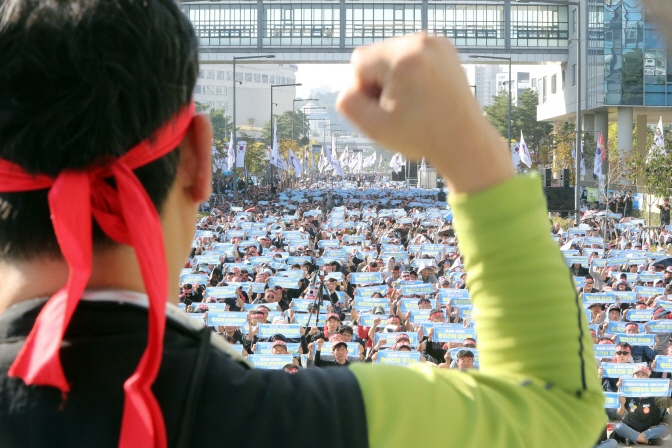 Unionized workers at KORAIL hold a rally in front of the finance ministry in Sejong on Oct. 11, 2019. (Yonhap)

The 19,000-member Korean Railway Workers’ Union is demanding that KORAIL normalize allowances and raise pay by 4 percent. They are also calling for the employment of new employees to shorten working hours for current workers.

The unionized workers decided to strike in early September after 12 rounds of high-level and working-level talks that started in May fell through.

The union said they will launch another strike in November if their demands are not met.

KORAIL chief executive Son Byung-seok said at a press briefing that the company “will do its best to end the strike at an early date through genuine talks with the labor union,” adding that passenger safety will not be compromised.

They are demanding the company, which runs subways lines 1 to 8, increase the number of maintenance workers and revise salary regulations for elderly staff.

The union said their action is mostly within normal operations and is more focused on complying with safety measures such as leaving the train doors open for a standard amount of time.

The union, however, said they plan to begin a three-day strike next week if their demands are not met.