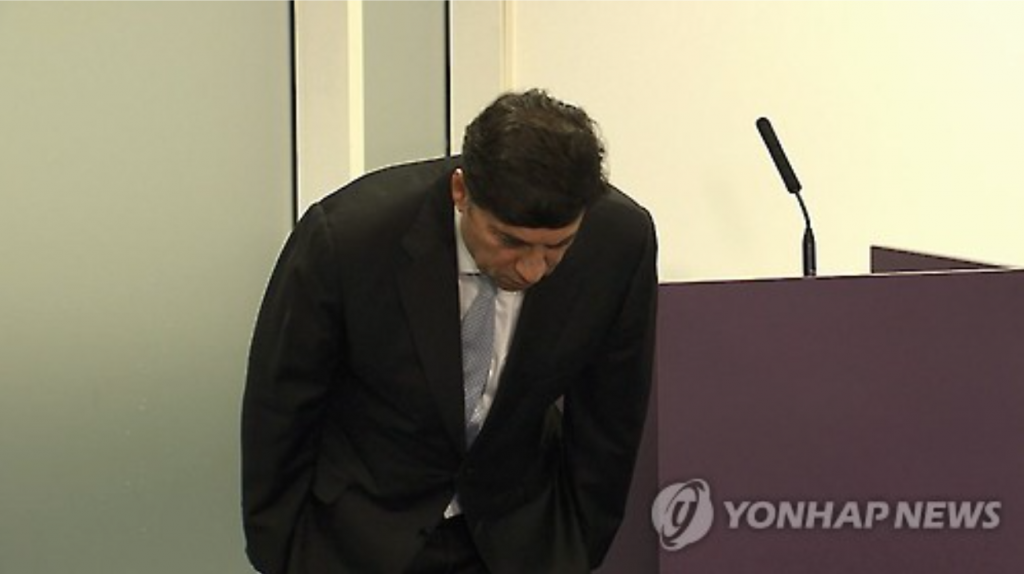 Reckitt Benckiser CEO Rakesh Kapoor said he wished to express a sincere apology for the pain and deaths of the South Korean consumers. (image: Yonhap)

The so-called Oxy humidifier disinfectant case came to light after four pregnant women died of unknown lung problems in 2011. A government-led investigation confirmed a connection between more than a hundred people who died of lung problems and the chemicals used to clean household humidifiers.

The committee said the move by the parent of Oxy Reckitt Benckiser marks the first time the company’s top management expressed regrets to the victims and their families for the scandal.

South Korea has confirmed 221 victims in the case. Among them, 177 had used Oxy products. Out of 90 deaths, 70 are believed to have been caused by products made by the British firm.

The apology was made during a visit to Britain by South Korea’s parliamentary committee looking into the case Wednesday.

Reckitt Benckiser CEO Rakesh Kapoor said he wished to express a sincere apology for the pain and deaths of the South Korean consumers. The company earlier outlined a compensation plan to the victims and their family members.

“The official apology to the victims and the National Assembly is an important step,” said Rep. Woo Won-shik of the main opposition Minjoo Party of Korea, who heads the committee.

The victims, meanwhile, said the British firm must provide reasonable compensation in a transparent manner.