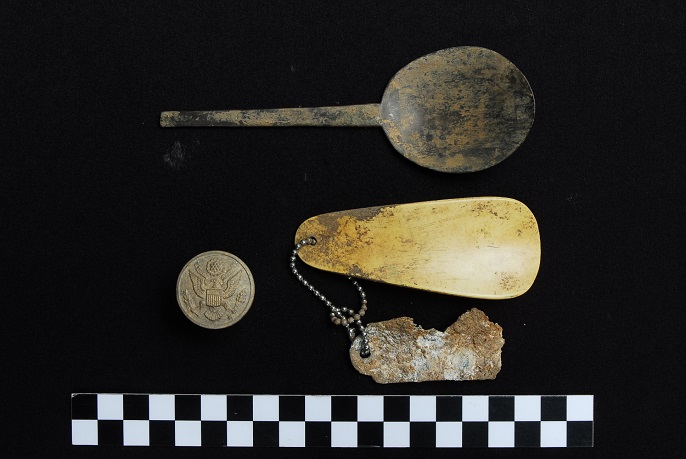 This photo provided by the defense ministry on Jan. 29, 2021, shows items of Kim Sung-geun found at a former Korean War battle site in the northern city of Chuncheon, Gangwon Province.

SEOUL, Jan. 29 (Korea Bizwire) — South Korea has identified the remains of two soldiers killed in the 1950-53 Korean War through DNA analysis after they were recovered from former battle sites near the inter-Korean border, the defense ministry said Friday.

Pfc. Kim Sung-geun was presumed to have been killed during a battle in 1950 that took place in Chuncheon, Gangwon Province, and his remains were excavated in the region in April 2010.

The identification was possible as his 73-year-old son registered his DNA sample with the government recently, according to the ministry. The son was a one-year-old baby at the time of his father’s death.

The other remains were found to be from Ssg. Cho Chang-sik, who took part in a 1951 battle in the northeastern county of Inje, and his remains were discovered there in 2017.

Since April 2000 when South Korea began the excavation project across the country, a total of 160 remains have been identified and returned to their loved ones.

The defense ministry said it will hold a ceremony to mark their return and lay their remains at a national cemetery next month.

During the three-year war, around 140,000 South Korean troops were killed in action, and some 450,000 others were injured.

The number of fallen South Korean troops whose remains have yet to be recovered stands at around 123,000, according to government data.