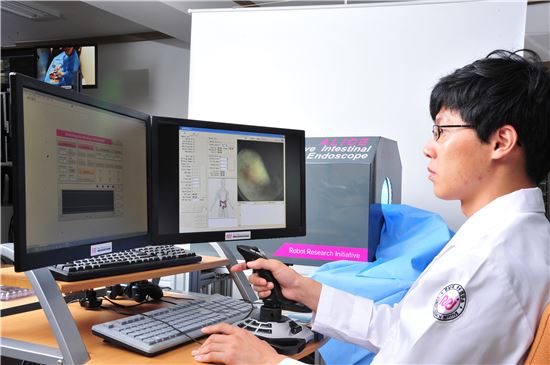 The active capsule endoscope can diagnose diseases in as little as 20 minutes while medical staff control the movement of the device in digestive organs such as the stomach, esophagus, small intestine and large intestine. (image: Chonnam National University)

SEOUL, April 1 (Korea Bizwire) – Scenes from the 1987 Hollywood movie “Innerspace,” which depicted a human controlled micro-capsule stuck inside a human body, will soon become reality in  Korea as the title holder of similar technology is transferring its patents to a medical company.

On March 31, the Robot Institute of Chonnam National University announced that it had decided to transfer eight patents, including “operation control system for capsule endoscope” to Woo Young Medical. In return, the medical firm agreed to pay the university 1 billion won (US$907,000) up front in engineering fees, and 2 percent of any future revenue derived from use of the technology.

Woo Young Medical plans to set up a new firm, called ARESMED, that will utilize the active capsule endoscope technology and commercialize its service. It will hold exclusive rights for the patents until 2035.

The university developed capsule endoscope devices while pursuing research into micro-robots for vascular treatment, and expects that the commercialization of its technology will generate 100 billion won in royalties from sales of 5 trillion won.

The active capsule endoscope can diagnose diseases in as little as 20 minutes while medical staff control the movement of the device in digestive organs such as the stomach, esophagus, small intestine and large intestine.

Making use of electromagnetic fields to manipulate the device, doctors can control the capsule’s position inside a patient’s body.

The new active capsule endoscope robot can diagnose diseases and take tissue samples as the electromagnetically driven active capsule moves freely inside the patient’s body, without causing any pain or discomfort.

Chonnam Professor Park Jong-oh said, “Korea is a world leader in micro-robots for medical usage, and it could be a highly value-added market for firms to participate in. This technology transfer will help Korea lead the next generation endoscope market.”