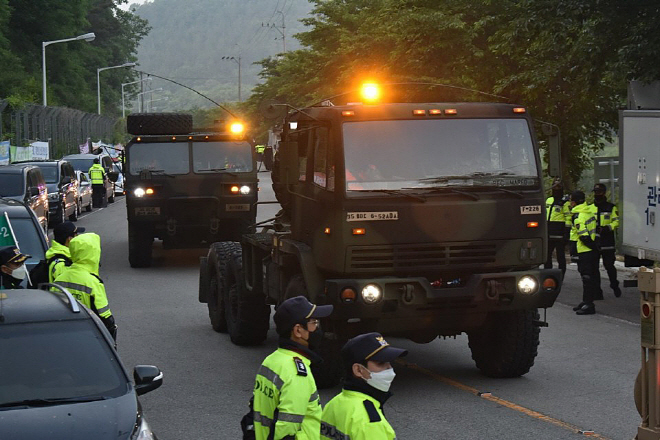 SEOUL, May 29 (Korea Bizwire) — New interceptor missiles were brought onto a U.S. THAAD missile defense base in South Korea on Friday as replacements, the defense ministry said, in a surprise overnight operation aimed at minimizing friction with local residents opposed to the base.

Also brought onto the Terminal High Altitude Area Defense (THAAD) base in the central town of Seongju were power generation equipment and other items to be used to improve the living conditions of troops stationed there, according to the ministry.

Seongju residents are opposed to the stationing of the battery in their village, citing environmental and other concerns.

They have often clashed violently with police as they tried to block new equipment and other supplies from entering the base, forcing the U.S. military to use air transportation to move supplies.

But the latest shipment was made by ground as the items were too heavy to be airlifted, officials said.

“We supported USFK’s ground transport for its Seongju base from last night until early today,” the defense ministry said in a release.

Dozens of residents and civic activists held an overnight rally to protest the transport and clashed with riot police trying to break up the rally.

Five people were injured and rushed to nearby hospitals, according to a civic group.

A ministry official said the government had prior consultations with local residents regarding the matter several times but failed to win their consent for the transport.

The items brought in Friday include multiple interceptor missiles, power generators and electronic equipment for data collection, a ministry official said, but refused to say exactly how many missiles were brought in.

He added that no additional launchers were moved onto the base. USFK has operated a full six-launcher THAAD battery in Seongju since 2017.

“The new missiles are of the same type as what USFK currently operates. As the mission is to replace expired ones, the number of new ones is exactly the same as that to be taken out of the base,” the official noted. Military vehicles transport equipment to the site of the Terminal High Altitude Area Defense (THAAD) base in the town of Seongju, about 220 km south of Seoul, on May 29, 2020, as part of an upgrade, in this photo released by a group of residents and activists opposing the installation of the missile defense system.

The THAAD deployment has been one of the most sensitive issues for South Korea, as China has taken economic retaliatory measures in opposition to Seoul’s hosting of the U.S. air defense system.

“Ahead of this operation, we fully explained to China about the issue and asked for its understanding,” another ministry official said. China was known to have not reacted negatively.

Beijing claimed that the THAAD deployment hurt its national interest, but Seoul and Washington have stressed that the system is only intended to better cope with the growing missile threats posed by North Korea.

The official also noted that this transport mission has nothing to do with the U.S.’ project to improve its THAAD batteries.

The U.S. has been working to upgrade its seven THAAD batteries, including one in Seongju, and related training equipment deployed around the world, for which the U.S. government sought a US$1 billion budget for next year.

The defense ministry dismissed speculation that the latest move is part of preparations for the official deployment of the THAAD battery.

The current deployment is temporary, pending the results of an environmental assessment study now under way.

“We’ve made clear that South Korea and the U.S. agreed to decide whether to formally install the system after a general environmental evaluation,” an official said.

Along with the military items, the two sides also conveyed construction equipment to be used in work to improve residential facilities for the troops, which has been under way since August last year.

The operation took place as USFK asked for Seoul’s support for ground transport, and the ministry decided to provide support after discussions with relevant ministries, according to the officials.

“USFK periodically conducts vehicular resupply and support missions to its formations and installations across South Korea,” USFK said in a statement sent to Yonhap News Agency.

It added that the move is to maintain a high “fight tonight” readiness level and to provide a robust combined defense posture to protect South Korea against any threat or adversary.

USFK and South Korea’s defense ministry “have maintained close coordination, cooperation and collaborative efforts to ensure this mission is conducted to minimize and prevent any inconvenience in the least disruptive manner for the local Korean population and all parties involved,” it said.