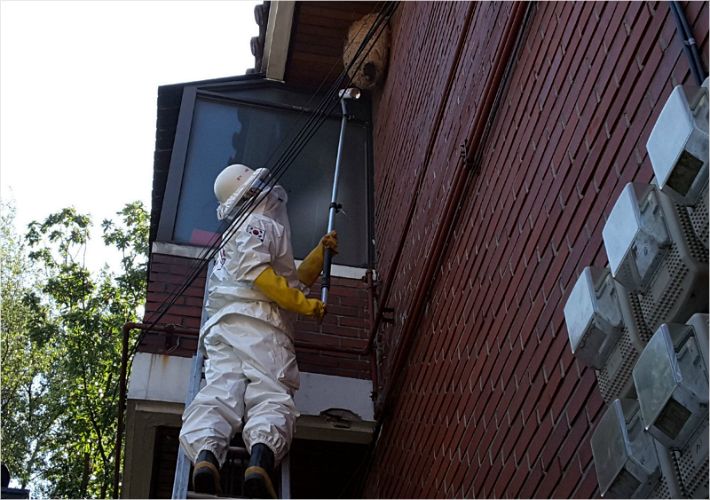 A rescuer removing a hornet nest on the wall of a house. (image: Gyeonggi Disaster and Safety Headquarters)

SEOUL, Dec. 10 (Korea Bizwire) – South Korean rescuers were dispatched most to deal with requests to remove hornet nests as part of their response to people’s livelihood-related problems in the 2015-2017 period, government data showed Monday.

The data from a public security database on livelihood-related problems, run by the National Fire Agency and the Korea Statistics, revealed that hornet nest removals topped the list of reasons for rescuer dispatches in 2017 with 159,000 cases, followed by animal seizures with 126,000 cases and lock openings with 70,000 cases.

During the reported period, more than 50 percent of rescuer dispatches were concentrated between July and September every year, when requests to have hornet nests removed were made most.

Hornets have had a serious effect on the ecosystem and human health in the country, prompting the agency’s rescuers to exterminate the dangerous insects.

Requests to have locks opened were made mainly by residents in apartments while those for removing hornet nests and catching stray animals were related most with houses, and roads and railways, respectively.

By region, Gyeonggi Province took the top spot in rescuer dispatches with 109,000 cases, trailed by Seoul with 61,000 and South Gyeongsang Province with 38,000.