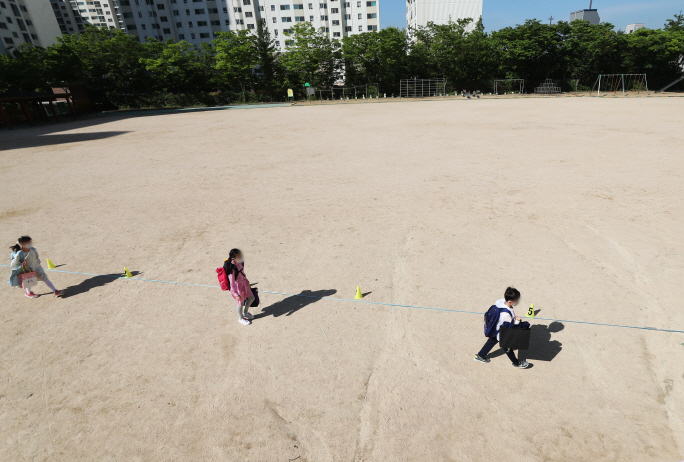 Students at an elementary school in Suwon, Gyeonggi Province, keep a distance from one another on May 27, 2020. (Yonhap)

This program consists of a series of training exercises including ones dedicated to overcoming depression, making friends, and promoting learning capacity, held twice a week as part of a five-week schedule.

The research team divided 50 children struggling with depression into two groups, with only one group following the therapy program, and compared them for analysis.

The group participating in the therapy showed overall improvement in terms of depression, concentration, quality of life, and self-esteem. Their Patient Health Questionnaire-9 (PHQ-9) scores, used to measure the severity of depression, dropped by an average of 37 percent.

The therapy is expected to help children overcome depression and other related disorders.

Children reluctant to talk about themselves tended to engage more actively in the computer-based therapy program, the research team explained.

“Game-based programs can raise accessibility for children struggling with depression,” said Shin Min-sup, a professor of child and adolescent psychiatry at Seoul National University Hospital who spearheaded the research.

“We believe this program could work as a safe alternative for means of treatment that normally requires physical contact.”