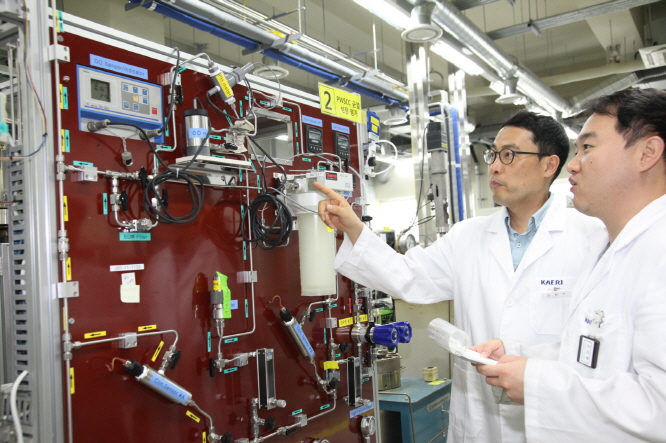 The discovery is expected to make it easier for nuclear plant operators to forecast when to replace such critical components as the steam generation tubing and penetration nozzles used in nuclear fuel rods. (image: Korea Atomic Energy Research Institute)

The discovery is expected to make it easier for nuclear plant operators to forecast when to replace such critical components as the steam generation tubing and penetration nozzles used in nuclear fuel rods, the Korea Atomic Energy Research Institute (KAERI) said.

These components are made of Inconel 690, an alloy made up of nickel, chrome, iron and titanium that has very high tensile strength and is resistant to corrosion cracking caused by factors like extreme stress and heat.

Timely replacement of components can make reactors much safer to operate and enhance efficiency. In the past, ultrasound imaging was used to predict when to change parts.

The new technology can be used not only for domestic OPR-1000 reactors like those in the Shin-Kori 3 and 4 units in northern Busan but also for the APR-1400 units that have been exported to the United Arab Emirates, it said.

He said countries like the United States are also engaged in similar research.

The discovery has been published in the latest issue of Nuclear Engineering and Technology and highlights the advances being made by South Korean engineers in the field of atomic energy, KAERI said.

Asia’s fourth largest economy currently operates 24 reactors that generate about 30 percent of its electricity needs, although Seoul is currently in the process of phasing out nuclear power in favor of renewable energy.