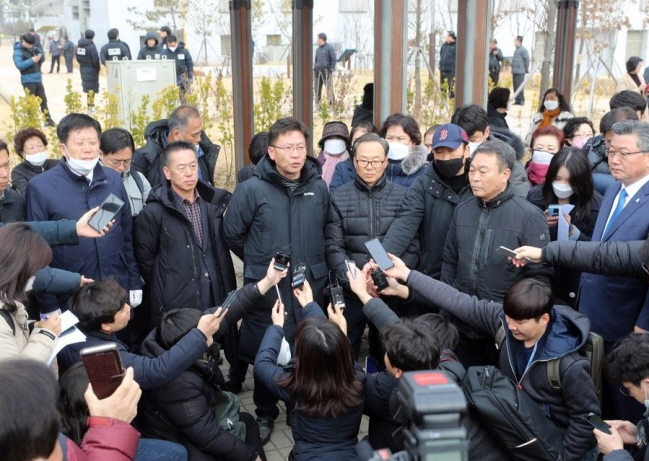 Residents of Jincheon hold a news conference on Jan. 31, 2020, to announce their decision not to oppose the government’s plan to accommodate Korean evacuees from Wuhan at a facility in the town. (Yonhap)

SEOUL, Jan. 31 (Korea Bizwire) — Residents of Jincheon and Asan said Friday they will no longer oppose the government’s decision to house South Korean nationals evacuated from China’s Wuhan, the epicenter of the new coronavirus outbreak, in the two central South Korean towns.

Instead, the Asan residents asked for thorough quarantine measures by authorities.

Earlier, nearly 370 evacuees from Wuhan arrived at Gimpo International Airport in western Seoul and 350 of them were bused to two government-designated facilities in Jincheon and Asan, both about 90 kilometers south of Seoul.

They will be quarantined there for 14 days, the virus’ known incubation period.

Of those who arrived in Gimpo, 18 people were taken to two state-designated hospitals for further examination after showing signs of fever during additional health screenings at the airport.

The South Korean government is in talks with China to airlift the second batch of its nationals from Wuhan at night.

Residents of Asan display various messages in support of Korean evacuees from Wuhan in these photos captured from various social networking sites. (PHOTO NOT FOR SALE) (Yonhap)

Asan and Jincheon residents voluntarily removed various protest banners and tents set up on the roads leading to the two government facilities.

The changing atmosphere is also evident on social networking sites.

For instance, a “We’re Asan” campaign is spreading among the Asan residents, while another resident expressed a desire to embrace Korean nationals fleeing from the Chinese viral disease.

Han Je-hee, a resident of Jincheon, also admitted that it is no longer possible to indiscriminately block a government decision. He said its campaign has shifted to calling for the government to heighten safety measures for residents.

“We didn’t opposed the government’s decision from the beginning. We just wanted it to know there are 30,000 residents living in a 1.2-km radius of the government training facility.

The Korean evacuees arrived at the two facilities after a two-hour bus ride from the Gimpo airport and will spend the next 14 days — the virus’ incubation period — in isolation there.

All adults aged over 12 will use single rooms, while children younger than 12 will share with a member of their family.

The buses passed through the entrance of the two institutes amid a tight police escort, while passengers were seen wearing face masks.

There was no physical clash with local residents. Some residents held a handwritten banner welcoming residents from Wuhan.

Local health offices have distributed 6,500 face masks and 200 bottles of hand sanitizer to residents in Asan and plan to visit each household to examine their health.