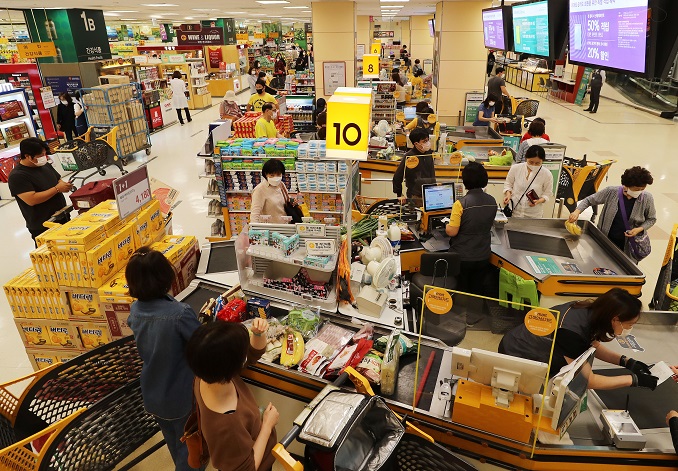 Customers shop for groceries at a supermarket located in Seoul on Sept. 28, 2020. (Yonhap)

SEOUL, Sept. 29 (Korea Bizwire) — Retail sales in South Korea moved up 6.6 percent in August from a year earlier due to a sharp rise in online sales amid the new coronavirus pandemic, data showed Tuesday.

The combined sales of 26 major offline and online retailers reached 11.9 trillion won (US$10 billion) last month, up from 11.16 trillion won last year, according to the data compiled by the Ministry of Trade, Industry and Energy.

After keeping the number of daily new virus cases under control for more than five months, South Korea added more than 100 cases on Aug. 14 before the number shot up to 441 on Aug. 27.

Online platforms led the growth, with their revenue advancing 20.1 percent over the period, the data showed.

In contrast, sales from offline stores dipped 2.4 percent as people avoided crowded places. The longest rainy season in nearly 50 years, which ran from late June to mid-August, weighed down on the sales as well.

At online stores, sales of foodstuffs shot up 43 percent over the period. The demand for home appliances, such as air conditioners and fans, also moved up 28 percent, according to the data.

Due to the COVID-19 pandemic, however, the sales of travel packages and entertainment tickets from online platforms dipped 6.3 percent on-year.

Offline stores, on the other hand, continued to lose ground.

Convenience stores were the sole winners thanks to rising demand for sanitary items, such as protective masks, with their revenue advancing 2.3 percent. Sales of other health-related items, such as vitamin pills, lent a hand to the strong sales as well.

Department stores saw their revenue drop 6.5 percent on-year in August, due to weak sales of fashion items due to the pandemic.

Sales at supermarkets decreased 2.3 percent due to a sharp decrease in the demand for sales, affected by the prolonged rainy season coupled with the virus pandemic.

In the first six months of the year, the combined retail sales reached 66.79 trillion won, up 3.7 percent from the previous year. Shipments by online stores advanced 17.5 percent, while those of offline stores dipped 6 percent.