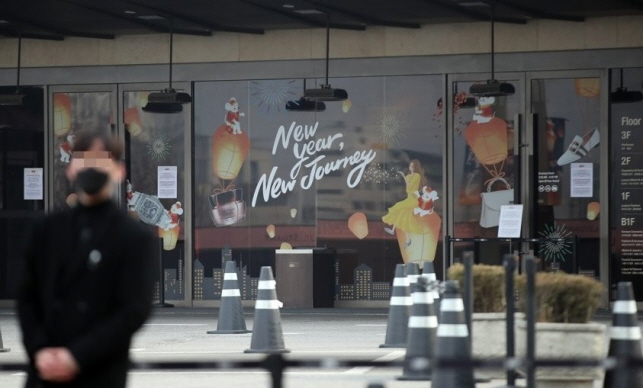 Doors are shut at a Shilla Duty Free shop in central Seoul on Feb. 2, 2020, after a coronavirus-infected person was confirmed to have visited it twice last month. (Yonhap)

SEOUL, Feb. 3 (Korea Bizwire) — A string of major retailers, including duty-free shops and hypermarket chains, across the country have temporarily shut down some of their stores, industry sources said Monday, stoking concerns that China coronavirus outbreak could affect consumer confidence in the sector.

Shilla Duty Free, one of the country’s leading duty-free operator, on Sunday closed its two outlets in central Seoul and on the southern resort island of Jeju after two coronavirus-infected people had each visited the shops.

He visited the duty-free shop inside Hotel Shilla on Jeju Island on Jan. 20 and on Jan. 27, according to the company.

Lotte Duty-Free, another major player here, also shut down its outlet on Jeju Island starting late Sunday after it was confirmed that another Chinese patient had visited the outlet last month.

“We just started banning new customers entering the shop and asking the customers to leave the outlet,” a company official said.

“We will announce the date of the re-opening after discussing the matter with health authorities and the Jeju provincial government officials.”

Lotte later announced it will reduce opening hours of four other duty-free shops, including its main location in Myeongdong, central Seoul.

The Myeongdong store is normally open until 9 p.m., but starting on Tuesday, doors will be shut at 6:30 p.m. Two other Seoul shops, at COEX and at Lotte World Tower, will also be closed at 6:30 p.m., two hours earlier than normal.

One other Lotte duty-free location in Busan, 450 kilometers southeast of the capital, will close at 6:30 p.m., instead of 8 p.m.

Shinsegae, another big retailer, will follow suit. Beginning Tuesday, its two Seoul shops, in Myeongdong and in Gangnam, southern Seoul, will stay open from 9:30 a.m. to 6:30 p.m, instead of the usual 9 a.m. to 8:30 p.m. slot.

Hours at Shilla IPark Duty Free in Yongsan, central Seoul, have been cut by two hours, and it will now be closed at 6:30 p.m.

Meanwhile, the department store AK Plaza in Suwon, 45 kilometers south of Seoul, will reopen for business on Tuesday.

AK Plaza closed its doors on Monday after learning that the wife of the 15th confirmed patient had worked there, but she has since tested negative for the virus.

E-Mart Inc., the country’s leading discount chain operator, said its store located in Bucheon, a city just outside of Seoul, has been closed since late Sunday as it was confirmed that the 12th patient and his wife, also the 14th confirmed case, had shopped at the site.

The company said disinfection operations have been made to prevent possible contamination, without disclosing details on re-opening.

The country’s 12th case worked as a tour guide in Japan and came in contact with a Japanese national who was diagnosed with the infection. The guide was symptom-free upon arrival and had freely moved about the country.

An investigation by the Korea Centers for Disease Control and Prevention (KCDC) confirmed that he had contact with a total of 138 people in Seoul, the surrounding Gyeonggi Province, and Gangwon Province. 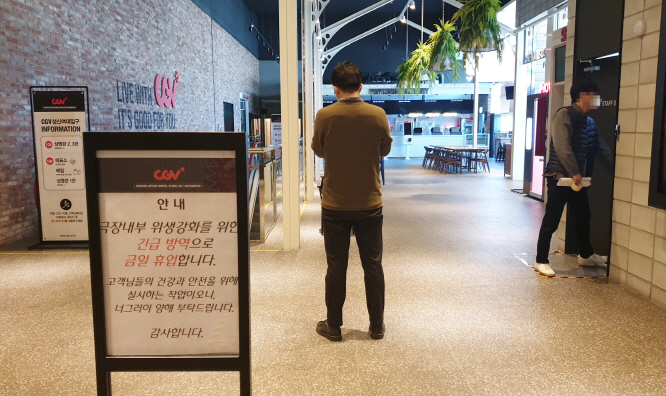 A sign announcing a suspension of business is on display at a movie theater in Seoul on Jan. 31, 2020, after the fifth patient confirmed as infected with the new coronavirus visited there. (Yonhap)

A movie theater affiliated with CJ CGV, South Korea’s largest multiplex cinema chain, in Bucheon has been closed since Saturday after the country’s fifth patient was known to have gone there.

An outlet of Korean cuisine restaurant chain Hanilkwan in Seoul followed suit, as the third and fifth patients confirmed as infected with the virus dined together there on Jan. 22.

South Korea reported a total of 15 confirmed coronavirus cases early Monday. The death toll from the virus in mainland China has reached 361, topping that of the severe acute respiratory syndrome (SARS) outbreak in 2003.

Amid the fast spread of the new strain of virus and new confirmed cases in the country, market watchers say the outbreak has just started to affect the local consumer sentiment.

“Consumer confidence in retail sector could possibly further be dented if the number of new cases in the country increases.”

Others also say major local cosmetics and duty-free operators dependent on Chinese tourists could be hit hard amid concerns that the fast-spreading China coronavirus may hurt their sales and profitability.

“Stock price is likely to hit the bottom during this week,” said Park Shin-ae, an analyst at KB & Securities Co, adding that Hotel Shilla, a duty-free operator, and Amore Pacific Co., the nation’s leading cosmetics maker, could take the hardest hit.

Amid increasing concerns over further spread of the virus, the country’s three major department stores suffered decreased sales over the weekend, compared to a year earlier.

Lotte Department Store’s sales were down 11 percent compared to a year earlier, according to industry sources.

Shinsegae Department Store reported its sales were down 12.6 percent during the weekend compared to a year earlier, with its Myeongdong outlet reporting a 23.5 percent on-year decrease.

Chinese vendors and individual Chinese merchants make duty-free purchases of such products as cosmetics in large quantities and sell them on back home.

The sources said Lotte Duty Free, a major duty-free operator here, reported around a 30 percent decrease in sales over the weekend.