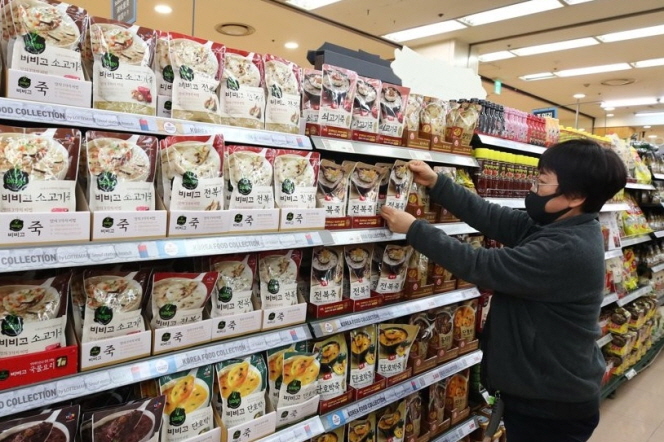 A worker at a Seoul retail outlet puts goods on display on March 12, 2020, in this file photo. There have been no signs of panic buying in South Korea since the World Health Organization declared the ongoing global COVID-19 crisis a pandemic the previous day. (Yonhap)

Homeplus Express, run by South Korean hypermarket chain operator Homeplus Co., transformed about one third of its roughly 300 outlets nationwide to ones specialized in fresh food and simple meals.

It increased the share of food products, while reducing the share of miscellaneous household items at these stores.

Lotte Super is replacing the signage of its stores into Fresh & Deli as part of efforts to strengthen its fresh food and prepared meal services.

Taking advantage of the location of their stores, which are often close to customers, SSMs are also competitively providing ‘1 hour delivery’ services.

Another hypermarket chain GS Supermarket launched a 1-hour delivery service in December last year using its stores in downtown areas as semi-dark stores in which a separate space in the back serves as a kind of logistics center.

The March sales of GS Supermarket’s 1-hour delivery service marked a 457 percent growth compared to the figure marked in December 2020.

In February, Homeplus Express also launched a 1-hour delivery service for products ordered through its online store by customers who live in the neighborhood of its direct-run stores.