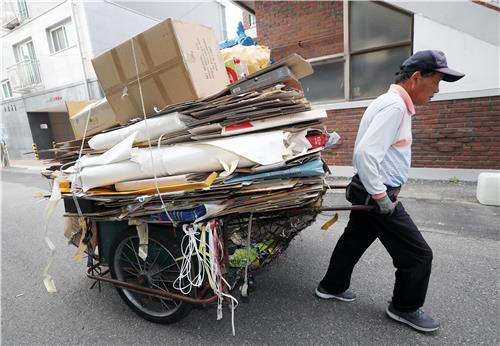 76-year-old Kim Chun-seon makes a living by collecting cardboard boxes and scrap metal before reselling these items to a recycling center. (image: Yonhap)

INCHEON, Sept. 27 (Korea Bizwire) — Born, raised and currently living in Incheon, 76-year-old Kim Chun-seon leaves his home at 7 or 8 o’clock in the morning, pushing his cart.

He makes a living by collecting cardboard boxes and scrap metal before reselling these items to a recycling center.

But Kim’s work does not end there.

His main motive for collecting boxes and metal is to help needy neighbors.

Every year, he donates 80 sacks of 10-kilogram rice to the welfare center. The total amount of rice Kim has donated over the last 25 years is over 2,000 sacks.

The donated rice is distributed to underprivileged members of his community, mostly the elderly population who are unable to benefit from government subsidies because they are estranged from their children.

Kim said that many of his neighbors are unable to eat proper meals because of their economic situation, and he is well placed to make that observation having witnessed his neighborhood throughout the years after he starting operating a junk shop when he was in his 20s.

Even though it was tough for Kim just to make ends meet with two children to support, he started digging into his own pocket to buy instant noodles and rice to help out neighbors who were even less fortunate than he was.

Now that his children are grown up, Kim has been able to retire, but his efforts to help out those in need have not been deterred.

After retirement, Kim bought a cart and started to collect cardboard boxes and scrap metal. The money he makes by reselling 200 kilograms of cardboard and metal is just 10,000 won.

A year’s worth of collection efforts would rake in 1.8 million won, but because this is not enough to buy 80 sacks of rice (selling for 2.2 million to 2.4 million won), he chips in to reach his own personal goal.

Even during this year’s sweltering heat, he managed to carry out his collection work every day without fail. Thanks to his hard work, he was awarded a “model citizen award” by the mayor of Incheon in 2016.

Kim says he will continue to collect cardboard and scrap metal as long as he can. “I wish that more people would help their neighbors,” said Kim.