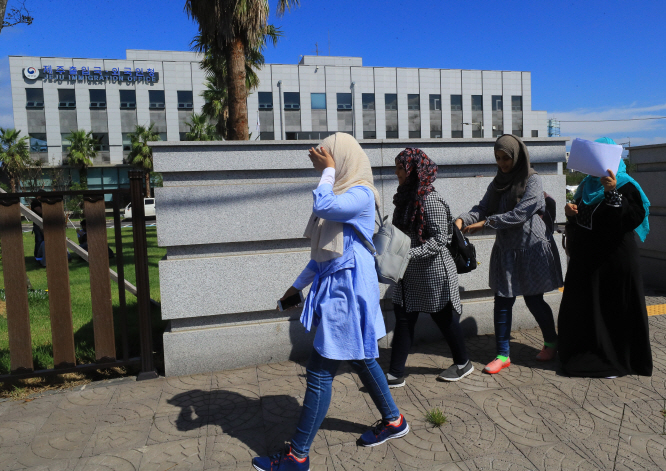 SEOUL, Sept. 24 (Korea Bizwire) — South Korea’s national human rights agency on Tuesday advised the Justice Ministry to use languages that refugees can understand in documents stating their refugee recognition status amid criticism the current system may infringe on their rights.

The National Human Rights Commission of Korea (NHRCK) said in a statement that it has advised the Justice Minister to amend regulations to translate the notice of non-recognition of refugee status into languages that refugees can understand in order to guarantee their rights.

The advisory follows an appeal that claimed issuance of the notice of non-recognition of refugee status, a document that notifies the applicant a denial of the motion, to Yemeni refugees in languages other than Arabic violates their right to know.

Hundreds of Yemenis arrived in the country’s southernmost island of Jeju last year, seeking asylum from war and humanitarian crisis in their homeland.

The mass arrival, however, sparked a controversy on refugee law in South Korea, which is known to be ethnically homogenous.

Of the 484 Yemenis who applied for refugee status in April 2018, 467 of them were not recognized as refugees but were granted a yearlong temporary sojourn.

Only two of them were recognized as refugees in December.

The human rights committee said a probe into the appeal found that the document notifying a denial of refugee status had been issued in Korean and English only.

An interpretation into their mother tongue was provided in special circumstances.

The United Nations refugee agency advises that a translation or an interpretation of the refugee application status result be provided to the refugee in their mother tongue, unless the interviews were conducted in English or French.

The NHRCK had also suggested providing the result in a translated document rather than a one-off interpretation, which carries the risk of being inaccurate.

The number of foreigners who applied for refugee status in South Korea jumped following the 2013 implementation of South Korea’s refugee law.

Last year, more than 16,000 people applied for refugee status, according to Justice Ministry data. Of them, 514 applicants were granted a humanitarian stay while 144 were recognized as refugees.