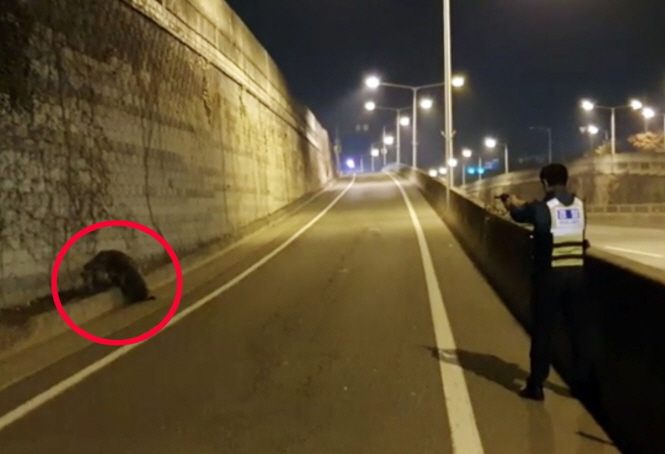 A police officer shooting at a wild boar in Gwangju, a metropolitan city in southwestern South Korea, on Oct. 25, 2019. (image: Gwangju Fire and Safety Headquarters)

SEOUL, Oct. 29 (Korea Bizwire) — Wild boars are posing a growing threat to South Korea’s urban dwellers lately, as the mountain animals flock in growing numbers to residential areas in search of food, destroy properties and facilities and even attack people.

This year, wild boars drew fresh media attention, as the deadly African swine fever (ASF) virus was detected from dead wild hogs near the inter-Korean border areas and South Korea’s quarantine authorities have embarked on large-scale operations to shoot and kill the wild animals to stem the spread of ASF.

Apart from the ASF fear, urban dwellers across the country feel increasingly threatened these days due to frequent sightings of wild boars in residential and even downtown areas.

According to police Tuesday, the number of urban appearances of wild boars and their captures and killings increased significantly this year.

On Monday, five or six wild boars showed up in a residential area of Dongnae Ward in Busan, the nation’s largest port city, at around 4:30 a.m., prompting citizens to call police.

Armed police officers shot dead four of them after two hours of search operations in apartment complexes and vacant homes.

The wild animals destroyed apartment parking lot facilities and roamed near an elementary school before being killed.

As the biggest mother wild boar escaped from the shooting scene, however, police officers patrolled the neighborhood streets for hours to ensure the safety of young students.

Three days earlier, a large wild boar weighing more than 100 kilograms appeared in a residential area in Busan’s Geumjeong Ward in the predawn hours before being shot dead by volunteers.

On Oct. 17, a group of 10 wild boars was killed after crashing into cars on a local road in Ulsan, a metropolitan city about 420 kilometers southeast of Seoul.

On the same day, seven wild boars appeared in a residential area in Cheongju, the capital of North Chungcheong Province about 140 km south of Seoul, at around 7:40 a.m.

One of the boars was shot dead but one police officer was wounded after being attacked by the animals during the shooting. 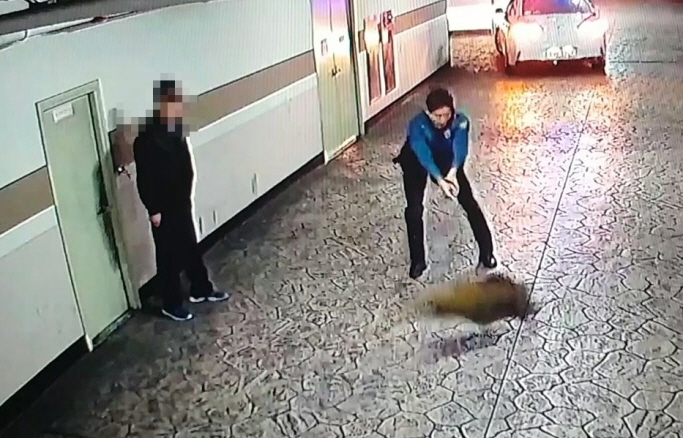 A police officer shooting at a wild boar in a residential area of the southern port city on Oct. 28, 2019. (image: Busan Metropolitan Police Agency)

In other urban areas nationwide, wild boars have been captured or killed, mostly at apartment complexes, university campuses and urban parks.

The Ministry of Environment said a total of 58,214 wild boars were captured from the beginning of this year to last Sunday.

This year’s data included wild boars captured in the authorities’ anti-ASF operation and exceeded the annual total of 54,012 captures in 2018.

According to the National Institute of Biological Resources, the inhabitation density of wild boars in South Korea has steadily increased over the past five years, rising from 4.3 wild boars per 100 hectares in 2014 to 5.2 in 2018.

The increasing inhabitation density led to food shortage for the wild animals, the institute speculated.

The sightings of wild boars in urban areas are particularly frequent in autumn and winter, when they come down in search of food and space.

Experts have asked the authorities to take fundamental measures to sharply reduce the wild boar population to help ease the people’s fear of the wild animals.

They also advise people not to run or shout when confronted with wild boars.