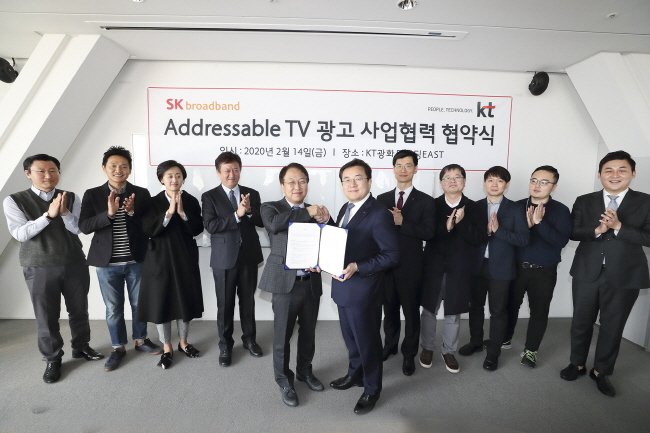 Officials from KT Corp. and SK Broadband Co. pose for a photo after signing a partnership on addressable TV advertising business at KT’s office building in Seoul on Feb. 14, 2020. (image: KT)

KT Corp. and SK Broadband Co. said they agreed to collaborate in the field of addressable TV advertising technologies that can help advertisers to selectively segment TV audiences and send different ads based on viewer data.

Under the deal, the two sides will work on standardization of such technologies and develop business models sharing their media know-how.

KT and SK Broadband are leading players in South Korea’s pay TV market. As of last year, KT had a 31.1 percent share to lead the local pay TV market, followed by LG Uplus Corp. with 25 percent and SK Telecom Co. with 24 percent.

SK Broadband is a subsidiary of SK Telecom. The company recently earned government approval to merge with the country’s No. 2 cable TV operator t-broad Co.