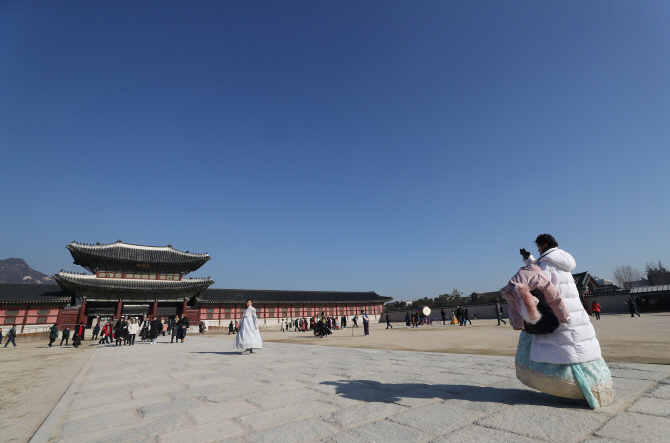 Four palaces from the Joseon Dynasty (1392-1910) — Gyeongbok, Changdeok, Deoksu and Changgyeong — will open during the four days including Monday, when they are usually closed.

Admission fees will be waived for visitors, except for the Secret Garden in Changdeok Palace, the agency said.

Royal tombs of the dynasty, which are scattered in Seoul and surrounding cities, and Jongmyo Shrine, where Joseon-era royal ancestral tablets are enshrined, will also be free of charge during the period.

Various cultural events will be offered in cultural sites under the heritage agency across the country to mark the Lunar New Year’s Day.

For example, Gyeongbok Palace will give out “sehwa”, or paintings intended to wish good fortune, by artists specializing in Buddhist painting to visitors on Saturday, the Lunar New Year’s Day.

Deoksu Palace and the management office of King Sejong’s tomb in Yeoju, southwest of Seoul, will offer chances to experience Korean folk games, such as “yut” and hoop rolling.

The National Research Institute of Maritime Cultural Heritage, in the southern city of Mokpo, will offer events related to the rat as 2020 is the Year of the Rat according to the Chinese Zodiac.