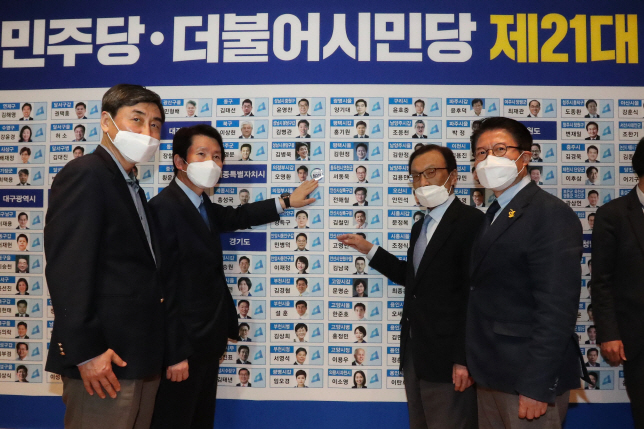 This photo, taken on April 15, 2020, shows officials at the Democratic Party and its satellite party posing in front of a board at the National Assembly in Seoul showing seats the parties have secured in the general elections. (Yonhap)

In one of the world’s first nationwide elections held amid the coronavirus pandemic, South Koreans awarded a majority of seats to the Democratic Party (DP) and its temporary sister party created for the proportional representation system.

The election was widely seen as a referendum on Moon, who has two more years in office, as he has been tackling several challenges — from an economic slowdown to chilled inter-Korean relations, and most recently, the virus pandemic.

Despite concerns that the pandemic would dampen voting, tens of millions of people braved the virus to cast their ballots for the quadrennial elections.

More than 29 million were estimated to have voted, leading to a tentative voter turnout of 66.2 percent, the highest in 28 years.

It ended up as a stunning victory for the DP, which currently has 120 lawmakers in the 300-member National Assembly.

The DP and its sister party, called the Platform Party, secured 180 seats or three-fifths of the total, far outnumbering the 103 seats won by the main opposition United Future Party (UFP) and its own sister party.

It means the ruling bloc would be able to fast-track the passage of bills without support from other parties.

Observers say it would be capable of “doing everything” in parliament except constitutional revision, which requires at least 200 votes on the floor.

It would enable the DP to avoid political squabbles in pushing for key reform bills, unlike during the outgoing session of the National Assembly.

The rival political forces were mired in repeated dogfights over contested bills, putting the parliament often at an impasse and even earning the moniker “animal parliament.”

The win also heralds no major shift in Moon’s controversial major polices, such as income-driven growth and the campaign to phase out the country’s nuclear energy use.

It is expected to lend support to accelerating Moon’s core initiatives, such as reforming the prosecution and giving police more investigative authority. 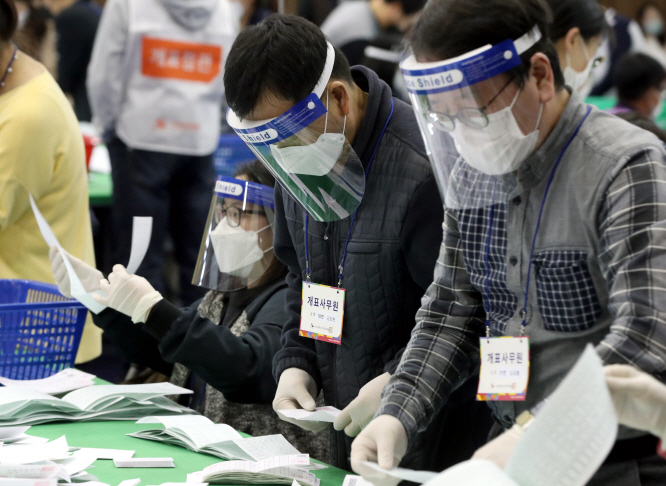 The poll results largely reflect positive sentiment for the liberal Moon administration, which has contained the virus fairly well.

In the early stages of the outbreak, public frustration surfaced over mask shortages and hoarding as well as lax quarantine measures.

New infections hit a daily peak of 909 on Feb. 29, according to the Korea Centers for Disease Control and Prevention.

But the government has succeeded in keeping the number below 30 for the past few days on the back of swift tracing and testing as well as tightened quarantine guidelines.

Largely boosted by the slowdown in new infections, Moon’s approval rate — which tumbled to the 30 percent level at one point last year — shot up to over 50 percent recently.

For now, the election result is expected to enable Moon to focus on pending agenda, such as tackling the virus and minimizing its fallout on the economy.

“We have to confront the inexperienced national crisis, but (the government) will move ahead audaciously with confidence in the people,” he said in a statement on the outcome of the parliamentary elections.

One tangible case would be the swift passage of a proposed extra budget to finance the government’s emergency relief funds over the coronavirus.

The Moon administration announced plans to dole out 1 million won (US$818) to all families whose income come is below 70 percent.

DP heavyweights echoed the sentiment as they pledged to beat the coronavirus and focus on state affairs.

“We will do our best to win the war against the coronavirus and overcome the economic crisis so as to reward people’s support for us,” DP Chairman Lee Hae-chan said.

Lee Nak-yon, who co-spearheaded the ruling party’s election campaign, also said, “We will calmly but clearly (act) so that the Moon Jae-in administration’s state affairs agenda will progress with concrete outcomes.”