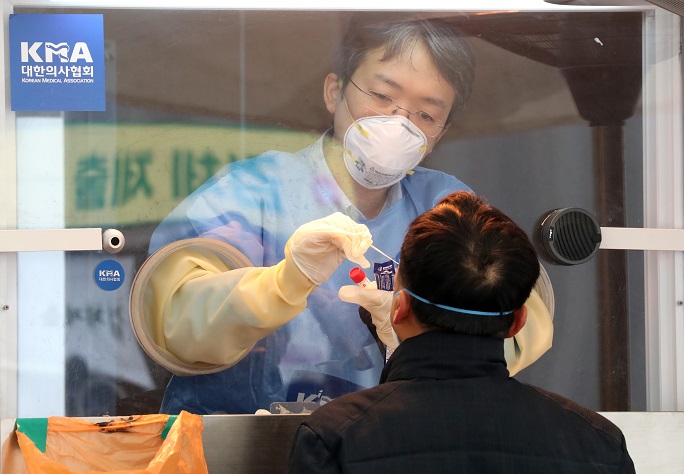 A medical worker conducts a virus test on a man at a makeshift testing booth in front of Seoul Station on Feb. 5, 2021. (Yonhap)

SEOUL, Feb. 6 (Korea Bizwire) — South Korea’s daily coronavirus cases stayed below 400 for the second consecutive day Saturday, while the government decided to relax a business curfew starting next week in most cities outside the greater Seoul area.

The country added 393 more COVID-19 cases in the past 24 hours, including 366 local infections, raising the cumulative caseload to 80,524, the Korea Disease Control and Prevention Agency (KDCA) said.

Saturday’s figure is higher than the 370 reported the previous day but lower than Thursday’s tally of 451. The death toll rose by five to 1,464, with the fatality rate at 1.82 percent.

The virus caseload has moved in the 300-400 range recently as cluster infections were reported from unauthorized education facilities run by a Christian missionary group in the central and southwestern regions.

As of 9 p.m. Saturday, the country had added 327 more cases, down 23 from the same time Friday, according to health authorities and local governments. New cases are counted until midnight each day and announced the next morning.

Concerns over yet another wave of the outbreak are growing as the country will celebrate the Lunar New Year holiday from Feb. 11-13.

Despite the risks, the government announced it will allow some businesses, such as restaurants and fitness clubs, outside the Seoul metropolitan region to extend their operating hours by one hour to 10 p.m., starting Monday.

The 9 p.m. closing will be maintained for Seoul and the surrounding areas.

The measure will not be applied to Gwangju Province in the country’s southwest, where a major cluster outbreak has been reported, health officials said. In other regions, the local governments will have the final say on whether to enforce the eased curfew.

“More than 70 percent of the patients are from the Seoul metropolitan area, and the infection risks remain high,” Prime Minister Chung Sye-kyun said in a daily government response meeting earlier in the day.

Chung explained that the government reflected the growing demand from businesses that have taken the brunt of the economic impact from COVID-19.

More than 580,000 businesses will benefit from the relaxation, according to officials.

Chung urged citizens again not to violate the distancing rules, stressing that any business establishment found to have flouted the restrictions will be suspended for two weeks.

The greater Seoul area is currently under Level 2.5 distancing, the second highest in the five-tier system, and Level 2 for the rest of the country. The measures, effective until Feb. 14, are mainly aimed at banning gatherings of five or more people. 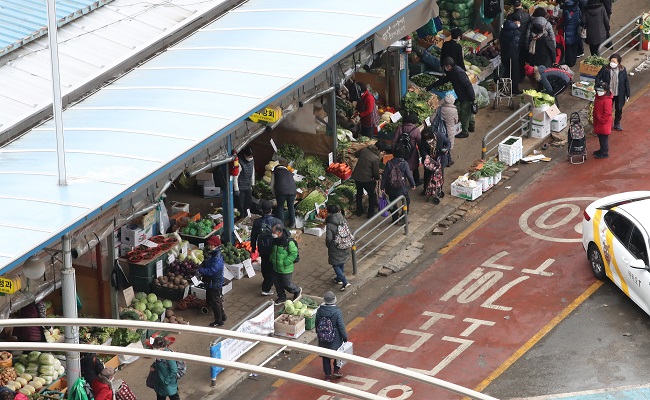 A traditional market in Seoul is crowded with people ahead of next week’s Lunar New Year holiday on Feb. 5, 2021. (Yonhap)

Of the newly identified local infections, 142 cases were reported in Seoul and 108 cases in the surrounding Gyeonggi Province. Incheon, 40 kilometers west of Seoul, reported 24 more cases.

Health officials said they found 12 more cases of COVID-19 variants, known to be much more contagious, in the tests conducted on 56 suspected cases. Ten of them came from Britain and two others from South Africa.

That brought the total caseload related to the variants to 51, which includes 37 from Britain, nine from South Africa and five others from Brazil.

The tally for seriously or critically ill COVID-19 patients on Saturday reached 197, down from 200 a day earlier.

The total number of people released from quarantine after making full recoveries stood at 70,505, up 388 from the previous day.