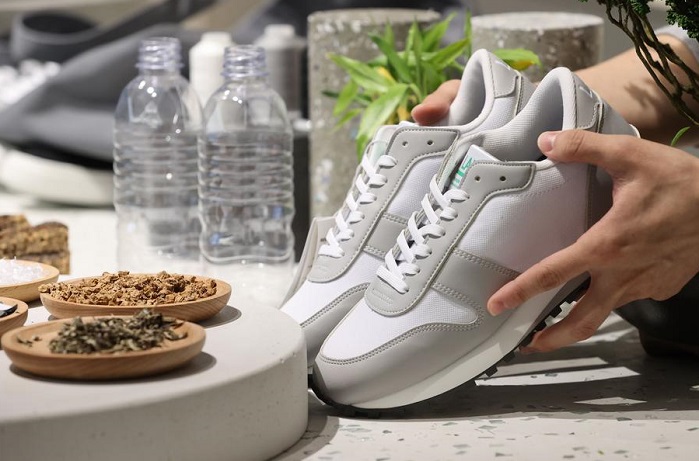 In this file photo taken on Oct. 6, 2021, an official shows shoes made with single-use plastics bottles. (Yonhap)

Ahn made the request during a meeting with EU Ambassador to South Korea Maria Castillo-Fernandez held in Seoul.

The Single-Use Plastics Directive, which came into effect in July last year, calls for banning certain single-use plastics. But it not only regulates fossil-based plastics but restricted eco-friendly bioplastics, according to the Ministry of Trade, Industry and Energy.

“The regulation has prevented South Korean companies with latest technologies of making bioplastics from accessing the European market. It is needed to review the regulation swiftly based on close consultations between the EU and companies concerned,” Ahn said, according to his office.

Currently, only South Korea, the United States and Japan have secured key technologies on bioplastics. 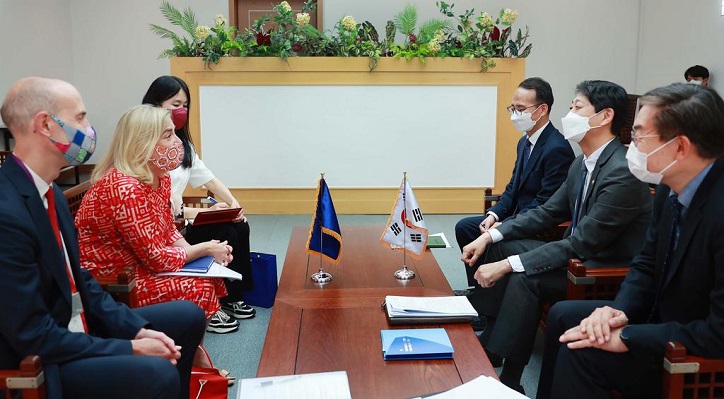 South Korean Trade Minister Ahn Duk-geun (2nd from R) talks with European Union Ambassador to South Korea Maria Castillo-Fernandez (2nd from L) at the government complex in Seoul on May 27, 2022, in this photo provided by the trade ministry.

During the meeting, the two sides also discussed ways of cooperation in supply chains, digital and other major trade issues.

They shared the assessment that the two sides have maintained close and staunch economic ties despite the COVID-19 pandemic and other global uncertainties, as two-way trade hit an all-time high of US$129.5 billion last year, up 26.1 percent from a year earlier.

The EU ambassador stressed the need to work together for a free and open market order and the transition to a sustainable economic structure in the face of a global supply chain crisis, the Ukraine war and other challenges, the ministry said.