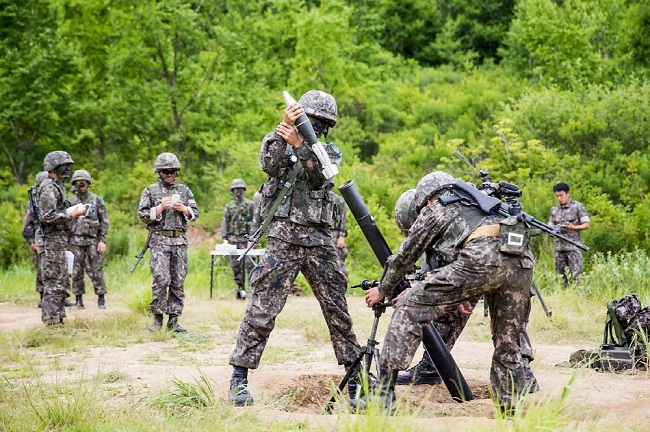 Service members carry out training involving an 81-millimeter mortar system in Hwacheon, Gangwon Province, on July 5, 2017, in this file photo provided by the Army.

SEOUL, July 29 (Korea Bizwire) — An upgraded version of South Korea’s indigenous 81-millimeter mortar system has been delivered to Army units for the first time since its development, the arms procurement agency said Thursday.

South Korea wrapped up the development of the advanced mortar system with its own technology in 2019 after five years of work.

The new system boasts of improved fire speed and accuracy, according to the Defense Acquisition Program Administration (DAPA).

Compared with the previous version, the new system is about 20 percent lighter and can be more swiftly transported by its own carrier vehicles.

Featuring laser and global positioning system technologies, the mortar can automatically calculate and transmit firing information, which improves the speed and accuracy of its shelling, according to the agency.

The existing version employs the manual input and transmission system.

“The new weapon with state-of-the-art digital technologies is expected to further strengthen our defense capabilities and to ensure the safety of our troops,” DAPA said in a release, vowing to support its advance into foreign markets.