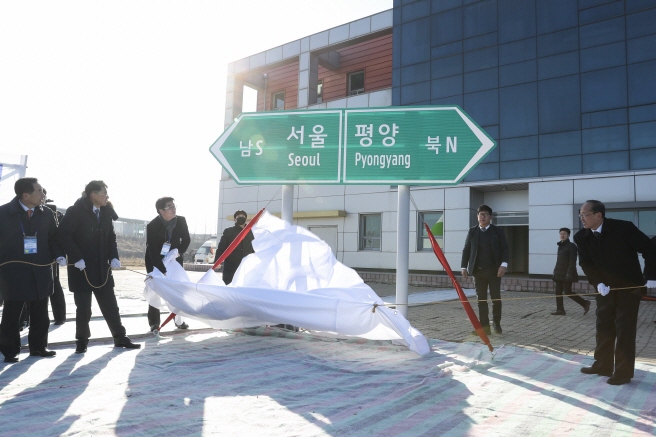 Participants unveil a road sign during a groundbreaking ceremony for a project to modernize and connect roads and railways over the border between the Koreas at Panmun Station in the North’s border town of Kaesong on Dec. 26, 2018, in this photo provided by the ministry.

SEOUL, April 23 (Korea Bizwire) – South Korea on Thursday designated a rail construction project along the east coast as an inter-Korean cooperative business as part of efforts to kick-start a long-suspended move to reconnect railways across the border with North Korea.

A civilian-government committee on inter-Korean exchanges made the decision for the construction of a 110.9-kilometer-long railway, paving the way for the project to move forward in a speedier manner without a preliminary feasibility study.

The envisioned railway connects the east coastal city of Gangneung to the border town of Jejin.

The government hopes to ultimately link the line to a North Korean railway over the heavily armed border and eventually all the way to Europe via the Trans-Siberian Railway.

“We are at a time when it is necessary to maintain the momentum for inter-Korean exchanges and cooperation, and to prepare an opportunity to improve inter-Korean relations,” Kim said while presiding over the committee meeting.

“In particular, the railway connection project has been agreed upon many times at Cabinet- and working-level talks since 2000, and it is desirable to push swiftly for it,” he said.

South Korean President Moon Jae-in and North Korean leader Kim Jong-un agreed in a summit in April 2018 to modernize and reconnect inter-Korean railways and roads running through the western and eastern regions, and held a groundbreaking ceremony for the project in December of the same year.

But actual construction has not yet started as global sanctions banning such economic cooperation projects with the North remain firmly in place amid a deadlock in denuclearization talks between Pyongyang and Washington.

With little prospect for the resumption of such cooperative projects anytime soon amid sanctions and strained inter-Korean relations, South Korea is trying to repair the southern section of railways first in an effort to prepare for full-swing cooperation down the road.

The ministry said that the rail construction is also expected to boost the local economy and contribute to balanced economic growth as the line could be linked to railways in the country’s western region, including Seoul, which would bolster the flow of people and goods.