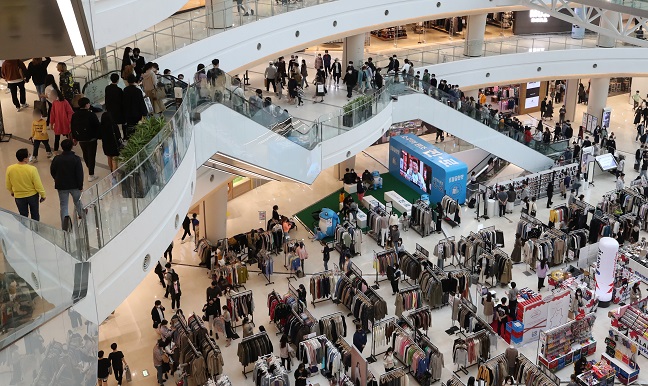 A mall in the western Seoul ward of Yeongdeungpo is busy with weekend shoppers on Oct. 11, 2020. (Yonhap)

SEOUL, Oct. 11 (Korea Bizwire) – South Korea on Sunday decided to lower its social-distancing guidelines to the lowest level on the three-tier scale amid a slowdown in new cases in recent weeks.

The number of daily new infections have mostly increased by double-digits over the past two weeks, sharply down from triple-digits growth in late August following a holiday and a mass rally that took place in central Seoul.

Under the decision, the country will ease the current Level 2 social distancing measures to Level 1 across the country, effective from Monday, Prime Minister Chung Sye-kyun said.

The country designated two weeks ending Sunday as a special period for an intensive antivirus campaign due to concerns that new virus cases may resurge after back-to-back holidays, including a three-day Chuseok fall harvest holiday.

“The average number of local infections fell to less than 60 on a daily basis over the past two weeks and the reproduction rate declined to ‘below 1,’ which led us to judge that the spread is being contained,” the prime minister said during a meeting of the Central Disaster and Safety Countermeasure Headquarters.

Chung said the government has decided to relax the social distancing measure considering the negative impact stronger measures have had on people’s sentiment and the domestic economy.

South Korea first adopted the Level 2 distancing measures in Seoul and the surrounding Gyeonggi Province on Aug. 16 and Incheon on Aug. 19. It was expanded nationwide on Aug. 23. 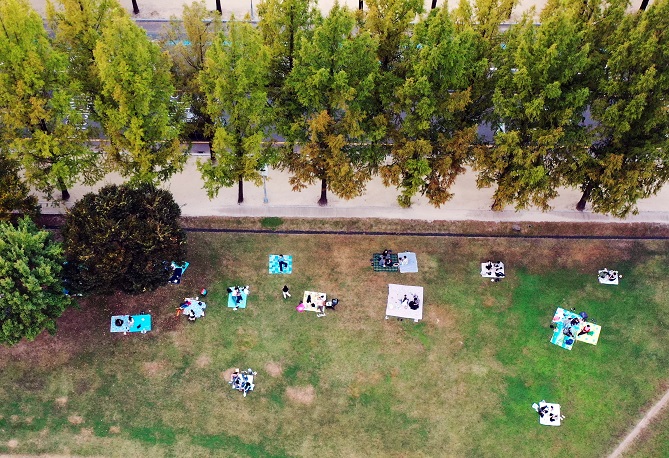 People enjoy picnic at a garden at Chonnam National University in Gwangju on Oct. 11, 2020. (Yonhap)

Under the eased measures, operations of 10 kinds of high-risk facilities such as karaoke rooms, gyms, buffets, and large-scale cram schools with more than 300 registered students will be allowed, health authorities said.

Audiences of up to 30 percent of stadium capacity will be allowed at sports matches, such as professional soccer and baseball leagues, the authorities said.

The prime minister, however, said the government will selectively retain tougher measures, such as those against door-to-door sales.

Outdoor gatherings of 100 or more people are prohibited and indoor meetings of 50 or more are banned under the Level 2 distancing, but this rule will be eased in the Level 1 scheme.

In the greater Seoul area, the government still advises people to refrain from holding gatherings and mass events, but does not ban them.

If people are to hold events, like festivals, concerts and exhibitions, they have to follow new limits on guests and spacing. One person will be allowed per four square meters, according to the authorities.

Also, five kinds of nightlife establishments such as night clubs will be subject to the same rules and must break for one hour after three hours of business. 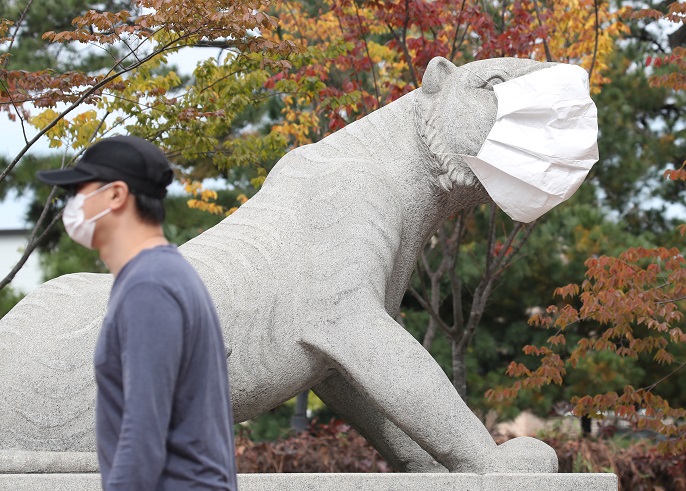 A lion statue wears a face mask at an amusement park in Gwacheon, just outside of Seoul, on Oct. 11, 2020. (Yonhap)

In-person worship services at churches are allowed in the greater Seoul area although they can only admit 30 percent of their seating capacity. Catering services and small group gatherings at churches are still banned under the eased guidelines.

Some measures will remain in place for the greater Seoul area where a fall in new cases has been relatively slow, Chung said, adding that seating arrangements based on social distancing will stay at cafes and restaurants.

Also, attendance caps at all schools nationwide will be eased to two thirds starting on Oct. 19, which will allow students to attend schools every day in regions other than the densely populated greater Seoul area.

”We believe the COVID-19 outbreak will continue and crisis can come at any time,” Health Minister Park Neung-hoo said. “This adjusted of social distancing does not mean we can stop distancing efforts.”

South Korea’s new virus cases showed signs of slowing on the back of enhanced restrictions. But sporadic cluster infections and untraceable cases have continued to strain the country’s virus fight.

The country added 58 new cases of COVID-19 on Sunday, increasing by double digits for the fourth straight day.