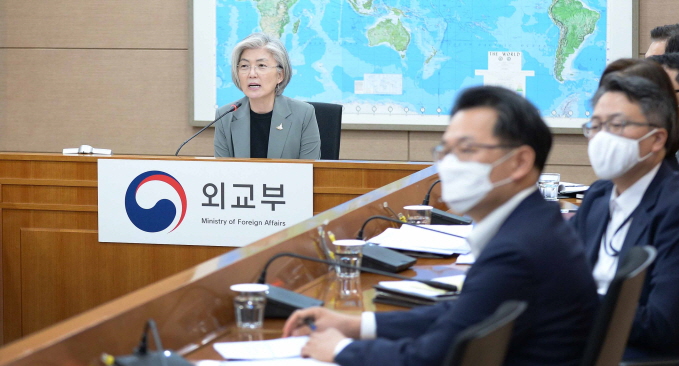 Foreign Minister Kang Kyung-wha speaks during a videoconference with chiefs of overseas South Korean missions at the foreign ministry in Seoul on May 6, 2020 in this photo provided by the ministry.

SEOUL, May 7 (Korea Bizwire) — South Korea is seeking to spearhead global discussions on battling the new coronavirus by launching multilateral cooperation groups in the United Nations and two other international organizations this month, a foreign ministry official said Thursday.

On the back of global recognition for its response to the COVID-19 pandemic, Seoul has been pushing to establish “Friends Group” in the U.N., the World Health Organization (WHO) and the U.N. Educational, Scientific and Cultural Organization (UNESCO).

The envisioned Friends Group at the UN is expected to be launched next week, the official said.

“Some 30 countries have already expressed their intention to join the Friends Group at the U.N.,” the official said, noting the group is slated to hold its first session in New York next week.

The United States and China have also shown interest in Seoul’s proposal for the Friends Group, but they have yet to decide whether to join the group.

Marked by mass testing, swift contact tracing and treatments based on its relatively advanced medical and communications infrastructure, South Korea’s response to the pandemic has gained global recognition.

With the daily tally of new infections dipping to single digits, Seoul has been exploring ways to address mounting calls for international cooperation in handling the pandemic through the provision of quarantine supplies and sharing of its know-how and experience.

On Wednesday, Foreign Minister Kang Kyung-wha held a videoconference with the chiefs of South Korean missions at the U.N. and other international organizations, where she called for active diplomacy to promote multinational cooperation in fighting the new virus.