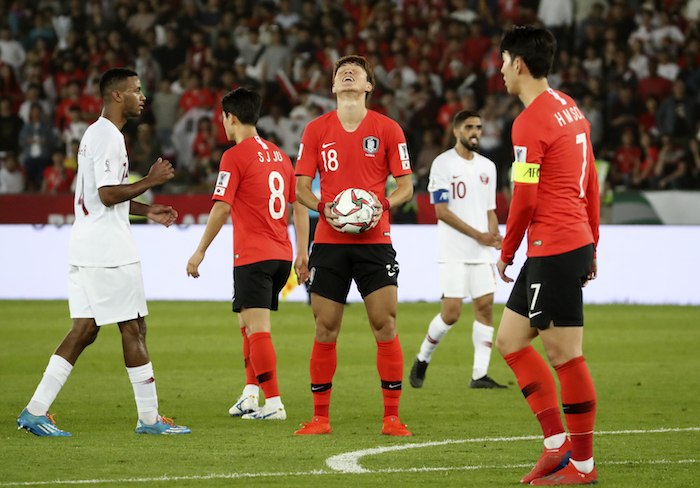 Hwang Ui-jo of South Korea (C) reacts after his goal was wiped out on an offside call in the quarterfinals match against Qatar at the Asian Football Confederation (AFC) Asian Cup at Zayed Sports City Stadium in Abu Dhabi on Jan. 25, 2019. (Image: Yonhap)

ABU DHABI, Jan. 26 (Korea Bizwire) — South Korea crashed out of the Asian Football Confederation (AFC) Asian Cup in the quarterfinals on Friday with a 1-0 loss to Qatar.

Abdelaziz Hatim’s goal in the 78th minute was all Qatar needed to shock South Korea at Zayed Sports City Stadium in Abu Dhabi, as the Taeguk Warriors’ 59-year Asian Cup title drought will continue for at least another four years.

This was South Korea’s first loss of the tournament and also the first under head coach Paulo Bento, who had guided South Korea to seven wins and four draws since taking the job last fall.’

The teams had a cautious start to the match, and it stayed that way for the rest of the dull, scoreless first half.

South Korea, 40 spots ahead of Qatar in the FIFA rankings at No. 53, held a substantial edge in the ball possession rate in the first half, 62 percent to 38 percent, but couldn’t get past the Qatari fortress — set up by three defenders with wing backs flanking them.

South Korea didn’t record a shot on target in the first half. Qatar’s lone shot on net came in the 32nd minute, when Akram Hassan Afif’s shot from the outside the box was easily grabbed by goalkeeper Kim Seung-gyu.

Two minutes later, Hwang In-beom jumped on a loose ball after a South Korean free kick but curled his shot high and wide right of the target. 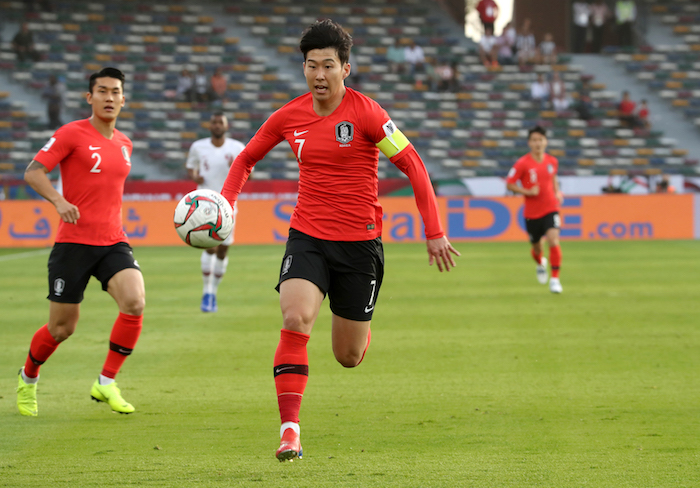 Both sides came out with a bit more energy in the second half and started trading some punches. Qatar spent the opening moments in the South Korean zone and saw a couple of attempts inside the box blocked by the scrambling defense.

South Korea finally got their first shot on target three minutes into the second half. Left back Kim Jin-su dialed in from long distance to spring forward Hwang Ui-jo on a fast break. Hwang then danced past a couple of defenders to fire a hard right-foot shot, forcing Saad Al Sheeb to make a tough save.

Then near the hour mark, Lee Chung-yong received a Kim Jin-su cross but redirected it over the net from close range.

At the other end, Almoez Ali, the tournament’s leading scorer with seven goals, took a low shot with his left foot that rolled into Kim Seung-gyu’s arms in the middle of the net.

In the 72nd, Son Heung-min got himself an open look after Qatar’s momentary defensive lapse, but as he cut in from the right side of the box to the middle, Son could only manage a weak left-footed shot easily stopped by Al Sheeb.

Four minutes later, Kim Jin-su took a direct free kick from outside the right edge of the box and rang it off the outside of the right post.

That missed opportunity haunted South Korea, as Hatim broke the scoreless deadlock in the 78th.

With the defense lying back and almost daring Hatim to shoot from long distance, the midfielder launched a low, hard shot that sailed in between two defenders and past the diving Kim Seung-gyu.

In the very next minute, Hwang Ui-jo volleyed home a Lee Yong cross for what appeared to be an equalizer, but the goal was called off due to Hwang being offside.

Following a video review, the call on the field stood. 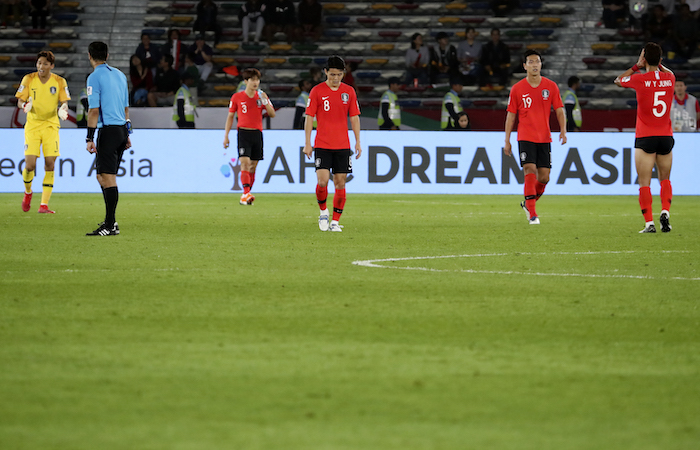 South Korean players (in red) react to a goal by Abdelaziz Hatim of Qatar in the quarterfinals at the Asian Football Confederation (AFC) Asian Cup at Zayed Sports City Stadium in Abu Dhabi on Jan. 25, 2019. (Image: Yonhap)

In a last-minute frenzy, Bento made a couple of substitutions on offense, putting in forward Ji Dong-won for midfielder Ju Se-jong and replacing winger Lee Chung-yong with pacy attacker Lee Seung-woo.

But those desperate moves didn’t produce the goal that the team desperately needed.

South Korea finished with a 60-40 edge in ball possession rate but only had a crossing accuracy of 5.6 percent. Qatar outshot South Korea 11-10, including a 4-2 advantage in shots on target.

South Korea managed just a goal apiece in each of the first two group matches. The arrival of Son Heung-min from Tottenham Hotspur before the final group match against China last week was expected to provide a boost to the lethargic offense. But Son, one of the hottest Premier League players in December, only had a limited impact versus China and was virtually invisible in the knockout stage.