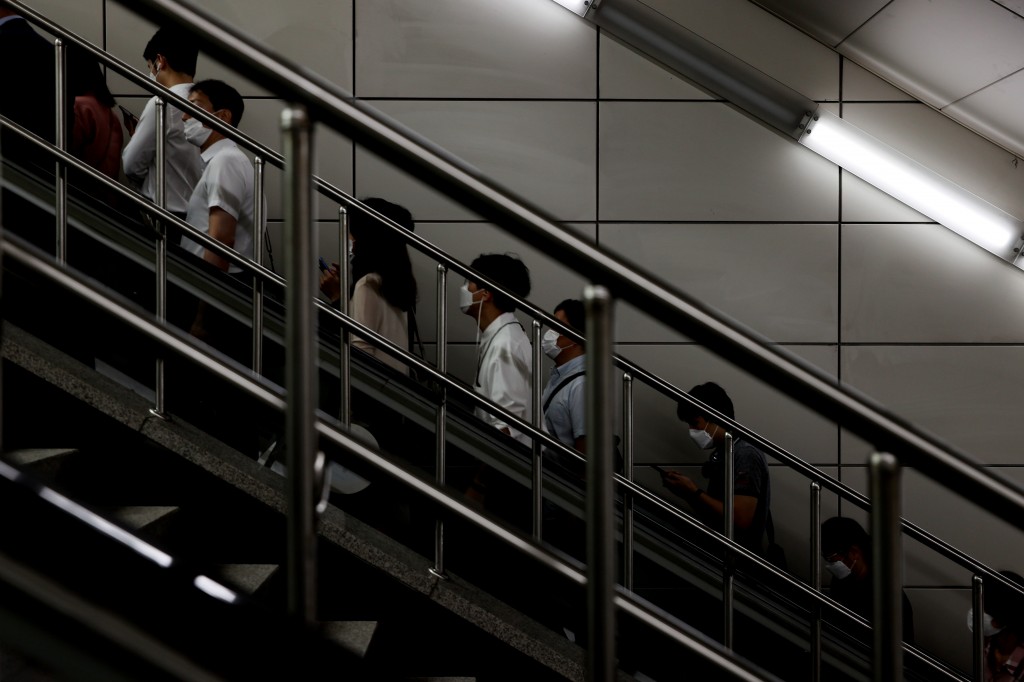 People wearing face masks ride an escalator at a subway station in Seoul on Sept. 1, 2020, amid the continued spread of the novel coronavirus. The government reported 235 new cases of the virus the same day. (Yonhap)

South Korea, once praised for its successful containment of COVID-19, reported 235 new cases Tuesday, raising the nation’s total to 20,182.

The country’s battle against the novel virus has had its ups and downs, with daily new virus cases peaking at 909 in late February. But it had managed to keep the number in double-digit figures until early August.

When South Korea faced its first wave of outbreaks tied to the minor religious sect Shincheonji in the southeastern city of Daegu in late February and early March, the authorities conducted quick and massive testing, bringing the situation under control.

After a 29-year-old man tested positive for COVID-19 following visits to clubs and bars in the neighborhood, hundreds of additional cases traced to Itaewon were reported.

A distribution center run by e-commerce giant Coupang Inc. also had emerged as a coronavirus hotbed after the first patient from the facility was identified in late May.

After the country loosened its quarantine scheme following monthslong social distancing and a slowdown in new cases, sporadic cluster outbreaks continued, but they did not push the situation out of control.

But the virus situation quickly worsened last month, with a series of cluster infections reported in the greater Seoul area, mostly tied to a conservative church in northern Seoul and an anti-government march in the capital on Liberation Day on Aug. 15.

Since Aug. 14, South Korea has been reporting daily new infections in the triple digits.

With more than 5,000, or over a quarter of the coronavirus cases reported in the past three weeks, health authorities are facing increasing difficulties in tracing and isolating potential patients. 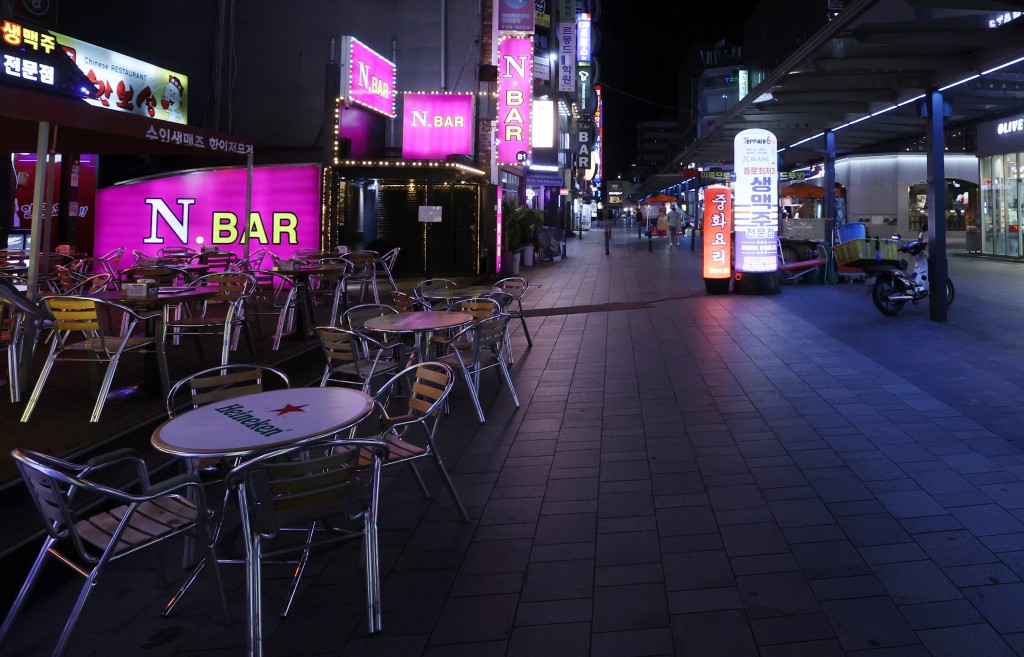 A street in Jongno, one of the busiest districts in Seoul, is mostly empty on Aug. 31, 2020, as South Korea has implemented strict social distancing measures to stem the spread of the new coronavirus. (Yonhap)

Jeong Eun-kyeong, chief of the Korea Centers for Disease Control and Prevention (KCDC), said they have expected the combat against the virus to be a long one, but the number has increased at a pace faster than what they had thought.

“The burden on our work for contact tracing is increasing due to the recent surge in the number of patients,” Jeong said during a regular press briefing Monday.

The proportion of untraceable cases has also spiked, further complicating authorities’ efforts to contain the virus. Of the cases confirmed in the past two weeks, a record 24.3 percent had unclear transmission routes.

Unlike the previous cases, the recent outbreaks have a much higher rate of unknown transmission routes with a large number of elderly patients who are more vulnerable to the virus.

Experts warn further escalation of the situation could put the country’s entire medical system in danger.

The number of critically ill virus patients soared to 104 on Tuesday, compared with nine on Aug. 18.

Under the eight-day enhanced restrictions, restaurants and bakeries can operate until 9 p.m., and only takeaway and delivery will be permitted from 9 p.m. to 5 a.m.

For franchise coffee chains, only takeout or delivery will be permitted regardless of operating hours, as cluster infections traced to coffee shops have been reported.

“We strengthened the social distancing rules because there were limits in tracing all the infected patients and isolating those who had come into contact with them,” Jeong said. “We are at a stage continuously contemplating how much sacrifice we should embrace to contain this virus.”

The toughest virus curbs, if implemented, are feared to take heavy tolls on the economy as well as on the society. 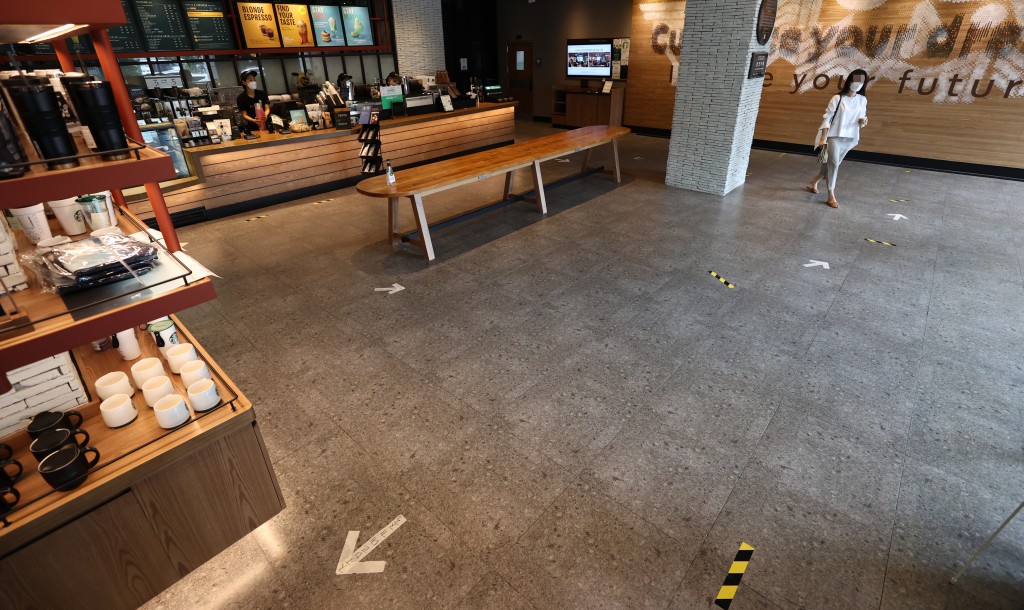 A coffeehouse is almost deserted, with all tables for customers removed and only orders for takeout coffee allowed, in Seoul on Aug. 31, 2020, as South Korea imposes strengthened antivirus curbs in the greater Seoul area to stop another nationwide spread of COVID-19. (Yonhap)

Last month, the Bank of Korea forecast a 1.3 percent contraction for Asia’s fourth-largest economy in 2020 amid the deepening virus fallout, sharper than its estimate in May of a 0.2 percent retreat.

The central bank said the economy is expected to contract 2.2 percent this year in the worst-case scenario, in which the flare-up in virus outbreaks continues into the winter.

South Korea lost about 277,000 jobs in July, marking a decline in the number of the employed for the fifth consecutive month, government data showed.

A record 7,507 schools had their doors closed nationwide as of Monday, after the government ordered schools in the greater Seoul area to switch to remote classes until Sept. 11.

All sports events are being held without spectators.

The total number of patients released from quarantine after making full recoveries stood at 15,198 on Tuesday, up 225 from the previous day. The death toll remained unchanged at 324. South Korea has conducted coronavirus tests on 1.96 million people.