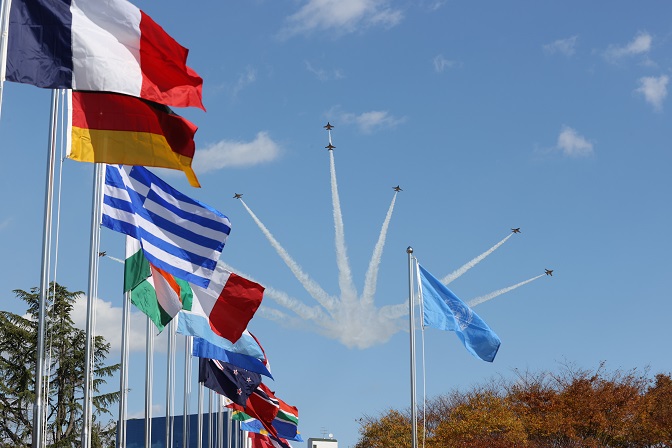 South Korea’s Black Eagles aerobatic flight team draws six lines in the sky to represent 11 o’clock on Nov. 11 over the U.N. Memorial Cemetery in Busan during the “Turn Toward Busan” ceremony in honor of U.N. soldiers who were killed during the 1950-53 Korean War on Nov. 11, 2021. (Yonhap)

The “Turn Toward Busan” event took place at the U.N. Memorial Cemetery in the southeastern port city of Busan with the attendance of some 300 people, including war veterans, their families and diplomatic delegates, the veterans affairs ministry said.

A minute of silence was observed with attendees turning toward the cemetery to pay homage to the troops who fought alongside South Korean forces during the first major armed conflict of the Cold War. Then came a 21-gun salute.

Among the participants was U.N. Command (UNC) chief Gen. Paul LaCamera, who highlighted the U.N. troops’ fearless dedication to the defense of South Korea.

“We again demonstrate to the world that we will never forget our fallen,” LaCamera said.

“The Korean people sleep peaceably in their beds at night, confident that our great force remains ready to continue to protect them. Nations continue to see that we are still the most lethal and combined military in the world,” he added.

Citing Yi Sun-sin, a legendary Korean admiral whose forces prevailed in a naval battle against Japan in the 16th century, the commander stressed his forces are “moving cautiously and prudently like a mountain.”

The event is observed in 22 other countries that also took part in the war. Some 1.95 million U.N. troops participated in the war, which ended in a truce, not a peace treaty. 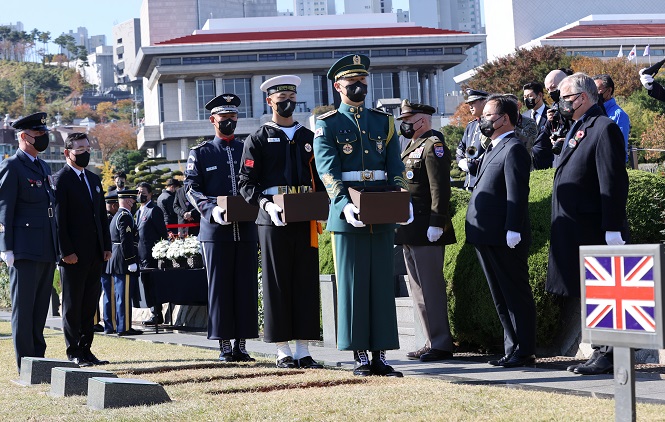 A ceremony to bury the remains of three unknown British soldiers who were killed in action during the Korean War takes place at the U.N. Memorial Park in Busan on Nov. 11, 2021. The remains were excavated in 2016 and 2017. Britain and 15 other nations fought for South Korea against the North Korean invasion during the conflict under the U.N. flag. (Yonhap)

During the ceremony, the remains of three British troops killed during the conflict, which were discovered between 2016-2017 in Paju, northwest of Seoul, were buried. They were laid to rest as “unknown soldiers” as their names have yet to be verified.

“On the banks of the Imjin River, 70 years ago, British and South Korean troops fought side by side against the forces of tyranny,” Johnson said. The river lies in Paju.

“And today, just as we did then, the U.K. stands with you for peace, prosperity, and the stability of the Korean Peninsula.”

The park, the only U.N. cemetery in the world, is home to more than 2,314 fallen veterans from 11 countries, including the three British troops.

On the margins of the memorial event, a new monument was also unveiled at the cemetery to mark the friendship between South Korea and Colombia and to honor around 5,100 Colombian soldiers who fought in the war under the U.N. banner.

The two nations will mark the 60th anniversary of forging diplomatic relations next year.