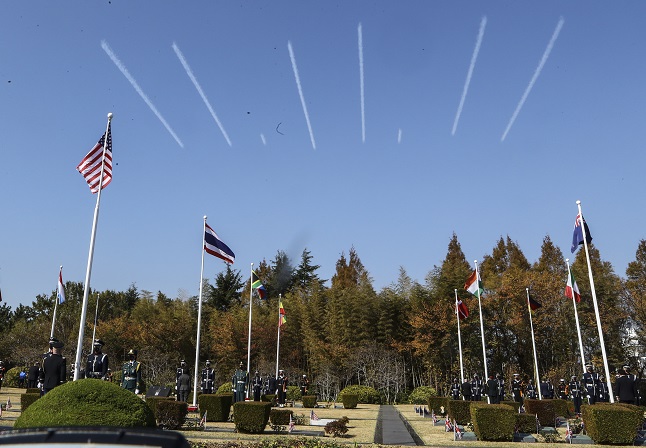 A ceremony to offer a one-minute silent prayer takes place at the U.N. Memorial Cemetery in South Korea’s southeastern port city of Busan on Nov. 11, 2020, to pay tribute to U.N. troops killed in the Korean War. (Yonhap)

The Ministry of Patriots and Veterans Affairs said that the veterans from seven countries, including the United States, Britain and Canada, and their family members are set to arrive here on Monday for a six-day visit.

The veterans are scheduled to attend the “Turn Toward Busan” event that will be held at the U.N. Memorial Cemetery on Thursday.

The event was first held in 2007 following a suggestion of Vincent Courtenay, a Canadian Korean War veteran. He will also attend this year’s event.

The southeastern port city of Busan is home to the U.N. Memorial Cemetery, the only U.N. cemetery in the world.

South Korea has so far invited around 33,000 Korean War veterans and family members since 1975 as part of efforts to honor their sacrifices during the Korean War.

Some 1.95 million U.N. troops from 22 countries took part in the war, which ended in a truce, not a peace treaty.

The veterans also plan to visit the Demilitarized Zone (DMZ) separating the two Koreas during their stay here, the ministry said.