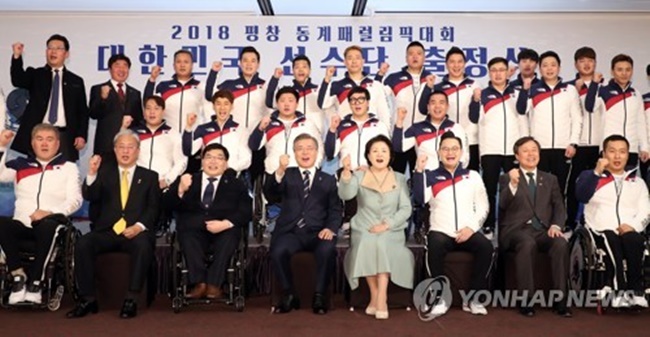 SEOUL, March 2 (Korea Bizwire) – The South Korean squad for the PyeongChang Winter Paralympics was launched on Friday as athletes vowed to give their best at the quadrennial event.

The delegation of 83 members, including 36 athletes, held the ceremony for the 2018 Winter Paralympic Games at Sejong Center in Seoul with some 180 guests, including South Korean President Moon Jae-in, Culture and Sports Minister Do Jong-hwan and Korean Paralympic Committee President Lee Myung-ho.

“You athletes fell down and stood up repeatedly to prepare for this day,” Moon said in his congratulatory speech. “You are all our heroes at every moment.”

The ceremony introduced the official cheerleading song for the Paralympic Games as well as video clips of athletes and also featured the handing of the delegation’s flag to chef de mission Bae Dong-hyun.

Host South Korea will have its largest squad ever at the Winter Paralympics as athletes represent the country in all six sports. It aims to collect one gold, one silver and two bronze medals at the PyeongChang Paralympics and finish inside the top 10.

The first group from the delegation will enter the PyeongChang Athletes’ Village on Saturday while the wheelchair curling team will join them at the village on Tuesday. The official village welcoming ceremony for the South Koreans will take place at 10 a.m. Tuesday.

The PyeongChang Winter Paralympics will be staged from March 9 to 18. The event follows the Winter Olympics that were staged from Feb. 9 to 25.

PyeongChang will host the largest Winter Paralympics so far, with 570 athletes from 49 countries having confirmed their participation. At Sochi 2014, there were 547 athletes from 45 countries.

The Winter Paralympics will take place at the same venues as the Winter Olympics. The opening and closing ceremonies, as well as most snow sports, will be staged in PyeongChang, while alpine skiing events will be contested in Jeongseon, some 215 kilometers east of Seoul. Gangneung, the coastal city in Gangwon Province, will host all ice sports during the Paralympics.