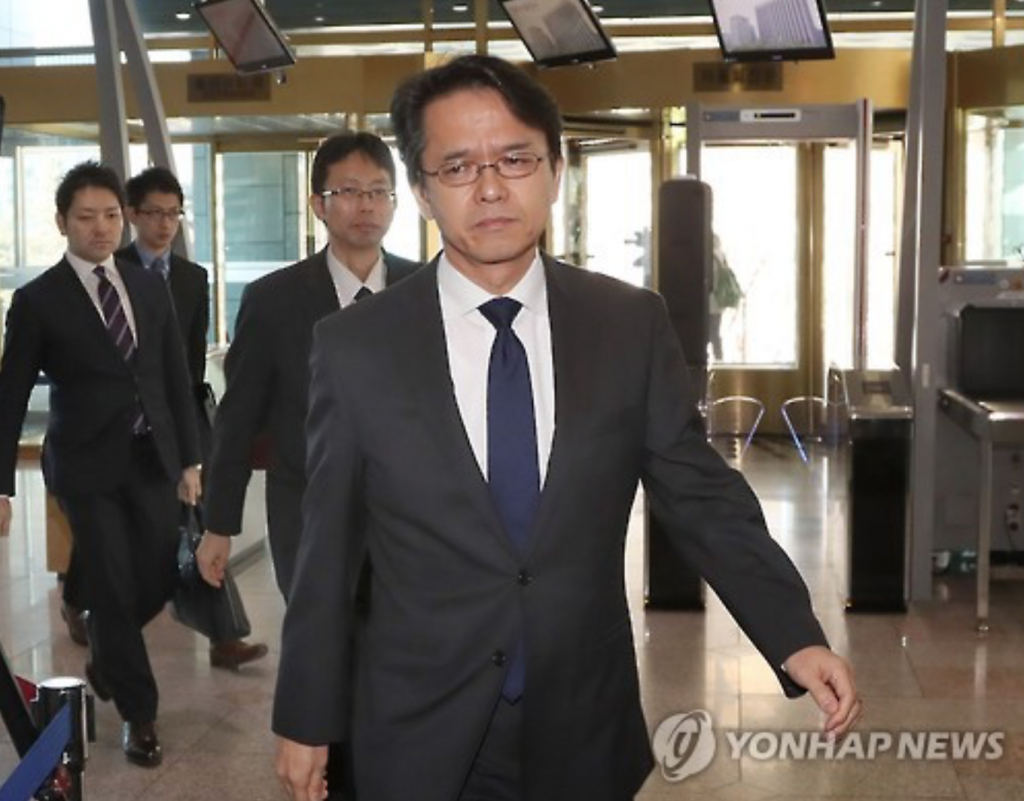 The director-general of the ministry’s Northeast Asia Affairs Bureau, Chung Byung-won, officially lodged the protest with Kohei Maruyama, a minister at the Japanese Embassy in South Korea, who was summoned to the ministry headquarters earlier in the day. (image: Yonhap)

The director-general of the ministry’s Northeast Asia Affairs Bureau, Chung Byung-won, officially lodged the protest with Kohei Maruyama, a minister at the Japanese Embassy in South Korea, who was summoned to the ministry headquarters earlier in the day.

“The government cannot suppress its deploration over the key Japanese politician’s worship at Yasukuni, which glorifies Japan’s past colonial infliction and aggression, and enshrines war criminals,” the ministry said.

“The government once again makes it clear that Japan could recover trust from its neighbors and the international society only when Japanese leaders face up to history correctly and carry their self-examination and sincere repentance into action,” it said.

The hawkish new defense chief visited the Yasukuni Shrine earlier in the day for the first time since assuming the key post in August.

The visit came a day after Prime Minister Shinzo Abe and U.S. President Barack Obama paid homage to thousands of U.S. soldiers killed in Japan’s Dec. 7, 1941, attack on the Pearl Harbor naval base in Hawaii. The attack prompted the United States to join World War II.

In a separate statement, the Ministry of National Defense also denounced the visit.

“We strongly condemn the Japanese defense minister’s visit to Yasukuni, which beautifies Japan’s war of aggression against its neighboring countries and honors war criminals,” the defense ministry said.

It is deplorable that Japan’s defense chief went to Yasukuni though South Korea has stressed that the two sides “face up to history and build a future-oriented relationship,” it said.

The shrine, which honors millions of mostly Japanese war dead, including World War II criminals, has long been at the center of a diplomatic dispute among Japan, South Korea and China.

It is also the first visit by a Japanese high-ranking official to Yasukuni after Seoul and Tokyo signed the General Security of Military Information Agreement (GSOMIA) in November to better counter North Korean threats.